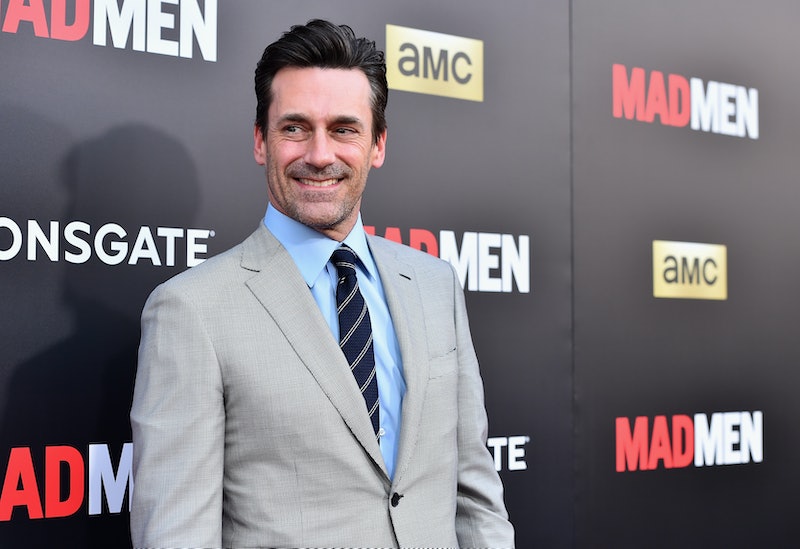 You're probably aware that the 67th Emmy Awards are coming up this week, and, for Mad Men fans, it's a final stab at those little gold figurines. What you may not realize, even as a dedicated Don Draper zealot, is that Jon Hamm has never won an Emmy. I know, right? In fact, with 16 nominations under his belt, you could go as far as saying that Hamm is without question the Leonardo DiCaprio of the Emmys.

"Oh, Mary Grace, you're just exaggerating." Shhhh. If you don't believe me, let me run down the list of everything these two beautiful, exquisite, majestic lions have in common. For your consideration, here are eight ways Hamm is definitely the DiCaprio of the small screen.

1. They're Both Mega Talented Actors With Extensive Careers

Granted, DiCaprio has been working since he was a child, and Hamm only burst into success in the last decade or so, but he was on the scene before that. Remember his barely-there guest spot on Gilmore Girls? That was like, five-ever ago.

2. They Both Have A Face That Looks Like It Was Carved By Seraphs

3. They Have An Unexpected Comedic Side

If you need proof Hamm is hilar, look at every Saturday Night Live cameo he's ever made... or granted, every cameo ever he's ever made. And remember when DiCaprio won the Golden Globe for Best Actor in a Comedy last year? Consolation prize of the century, but hey.

4. They're Both Not About Marriage

Granted, Hamm was, up until recently (!!!), in a long-term relationship with Jennifer Westfeldt, whereas DiCaprio is just a serial modelizer. In any case, wedding rings ain't no thing.

5. My Mom Would Date Either Of Them

I have it on good authority that, given the chance, my mom would make Hamm or DiCaprio my new stepdad. This is because she has good taste.

Not really big on the Grizzly Adams look for either of them, but we all make sacrifices for love.

8. They're Really Excellent At Crying

I meant on camera at first, but I'm also sure they're really great at crying alone in their rooms whenever they're passed up for another award. Fingers crossed, gents!