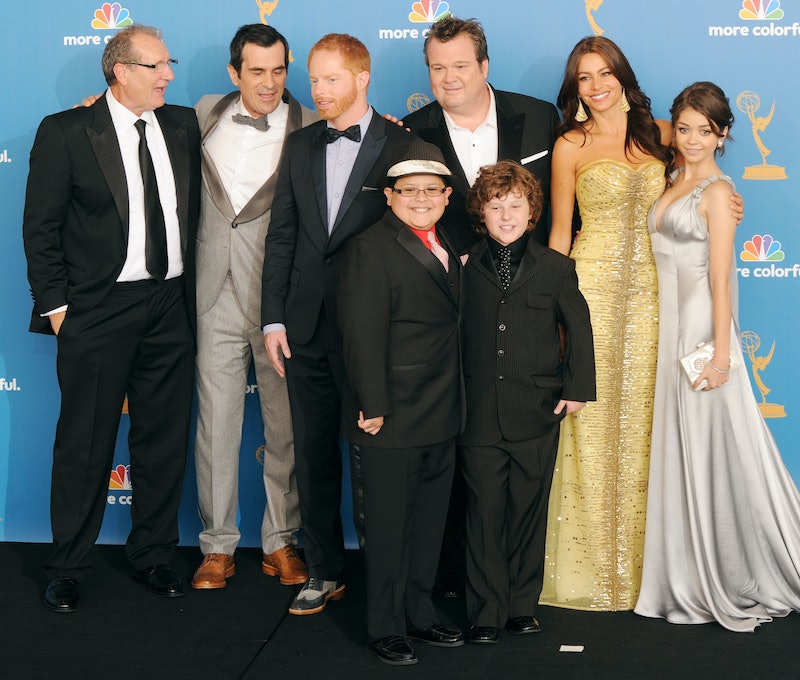 The cast of Modern Family has come a long way since nabbing their first armful of Emmy awards in 2010 — five years, seven seasons, and more than twenty Emmy wins, to be exact — and the show just keeps getting better and better. But lets not forget the Modern Family family's first Emmys appearance, which was memorable for a variety of reasons, fashion choices include.

Half a decade later, Modern Family is nominated for four awards this year, including Outstanding Comedy Series, a category in which they've been undefeated since the show first aired. This time they'll go head-to-head with other hilarious shows like Louis, Silicon Valley, and Netflix' Unbreakable Kimmy Schmidt.

By now, the cast and crew are seasoned pros at topping best dressed lists and stepping onto stage to accept awards without tripping over gown hems. Here's how the stars rocked their first red carpet back in 2010, when Vergara channeled Belle from Beauty and the Beast and Jesse Tyler Ferguson spruced up the red carpet in black-and-white wingtips.

Fact: Vergara is great on the red carpet. She's always glammed-out, and she's a hoot on-camera for interviews, bringing high energy and effervescence that TV presenters love playing off of. She wore a Carolina Herrera gown and giant Lorraine Schwartz canary gold jewels. The dress looks better up-close, where you can appreciate the detail and fit; from far away it looks like a really dated (even in 2010) tiger print.

Bowen chose a super elegant J. Mendel gown in navy, with an elaborate, ruffly bow on one side. For accessories, she went with Neil Lane jewelry, Sergio Rossi shoes and a Jimmy Choo clutch. The gown may look classic, but it's actually pretty avant-garde, in a McQueen kind of way.

Just nineteen years old at the time, Sarah Hyland looked lovely in a lavender Pamela Roland gown that elongated her petite frame. The dress seemed a bit mature for her age, but she still rocked it.

2. The guys looked dashing in tuxedos:

Eric Stonestreet nabbed an award for Supporting Actor, wearing a sleek black tux with shiny lapels, and no tie. He looks relaxed but not schlubby. I think Cam would have approved of the impeccable tailoring, and a white pocket square.

Ed O'Neill went slightly more casual with a tie instead of a bow-tie, while Burrell hammed it up in a stone-colored suit and a matching bow-tie, and Jesse Tyler Ferguson put the "modern" in Modern Family with fresh-to-death wingtip shoes.

3. And the show's kids cleaned up well, too:

Ariel Winter was just 12 years old when she did her first red carpet appearance in this Disney-worthy gown. She must have felt like a princess; she totally looked like one.

Rico Rodriguez seemed to come in character, looking adorable in a kid-sized suit, a bright red shirt, and a fedora. It was appropriately formal, honoring the landmark moment for the show, but playful and youthful, too. I am suddenly overwhelmed with the urge to pinch his cheeks, what's happening?!

I can't wait to see the continued evolution of the stars' style on this year's red carpet — I'm sure we'll see some "Best Dressed"-worthy gowns, enviably shiny, bouncy hair (Vergara) and some cheeky headgear (Rodriguez) from the award-winning cast.