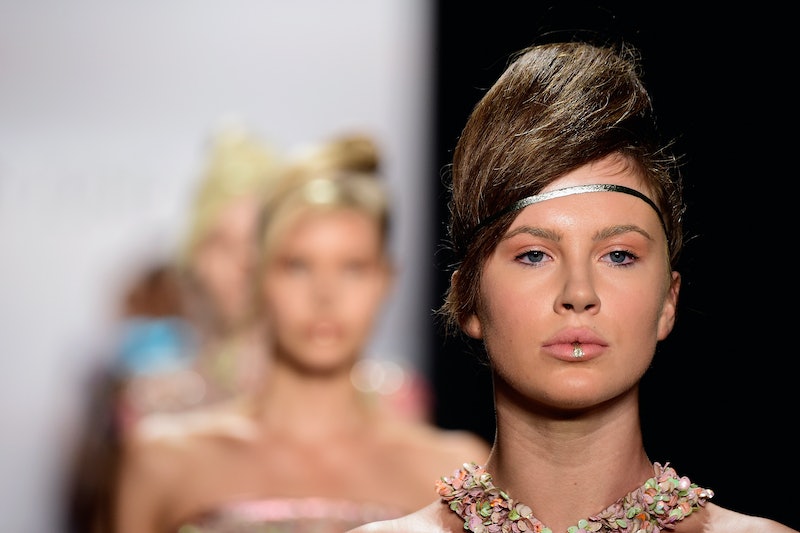 This model has had enough of body shaming, and she's not taking it sitting down. Ireland Baldwin shut down haters who called her too fat to model, taking to Instagram to call them out on their BS.

Two years ago, after Baldwin signed with IMG models, she told Page Six that she received a lot of hateful tweets and emails saying she was too fat to model. Of course, there's just no such thing — every body is beautiful and worthy of killing it on the runway. Now, in 2015, she wants everyone to know she isn't having any of the body snark. From gracing the pages of LOVE to landing big name campaigns, Baldwin is thriving in the fashion community.

Models are constantly being told they're too skinny or too fat. After walking in the Son Jung Wan S/S '16 show on Sunday, Baldwin stuck it to the bullies by posting a witty video of her on Instagram chowing down on a soft pretzel with the caption "Too fat 4 NYFW but I DID IT." She's everyone's spirit animal, basically.

But this isn't the only time Baldwin has spoken out against fat shamers in the industry. From Tumblr to Twitter, the 19-year-old model wants everyone to know that body shaming is disgusting (because it is, duh). Here are a few of her other body-positive moments.

1. When she took to Tumblr

After the aforementioned ordeal with her modeling debut, Baldwin had just a few words to say about it on her Tumblr:

"I get those comments about how I am too fat to model, how I am not model material, how I am an unattractive girl, how I am too tall, etc. I understand. I don’t look as glamourous as Rosie Huntington Whitely when leaving the gym. I’m actually really sweaty. Like really sweaty. I understand that I am not a size .008. What I don’t fully understand, is what is the good in commenting on a photo of a 17 year old girl and calling her fat, ugly, etc? Is that helping you in some way? I’m confused. I know girls tend to have nasty things to say about other girls and judging the looks of other girls is only human of us all, but putting that out there is hateful and unhealthy."

2. When she spoke out in support of Kendall Jenner

After a tabloid publication was accused of Photoshopping cellulite onto Jenner's legs in a picture of her walking the Tommy Hilfiger runway, Baldwin spoke out on Twitter against fat-shaming. Although she's since deleted her account, you can still read her tweets on the Web.

3. When she defended Free the Nipple

During an interview with Cosmopolitan , Baldwin expressed her dismay over Instagram's nipple ban, saying:

To be honest, I think that [Instagram's policy] it's so effing stupid, because there are boobs and nipples all over Tumblr, all over Twitter, all over the world. Just walk around and there are boobs all over life, and in great artwork, in classic paintings, and in sculptures; it's everywhere. Instagram is just behind the times.

I wasn't using [Instagram] for a while, actually — I wasn't necessarily protesting, but I just don't agree. I've had photos deleted by them, and I stopped using it for a month or so, just because I was so over it.

Needless to say, I hope we see a lot more of Baldwin over the next few years. With that attitude, she's not going anywhere.