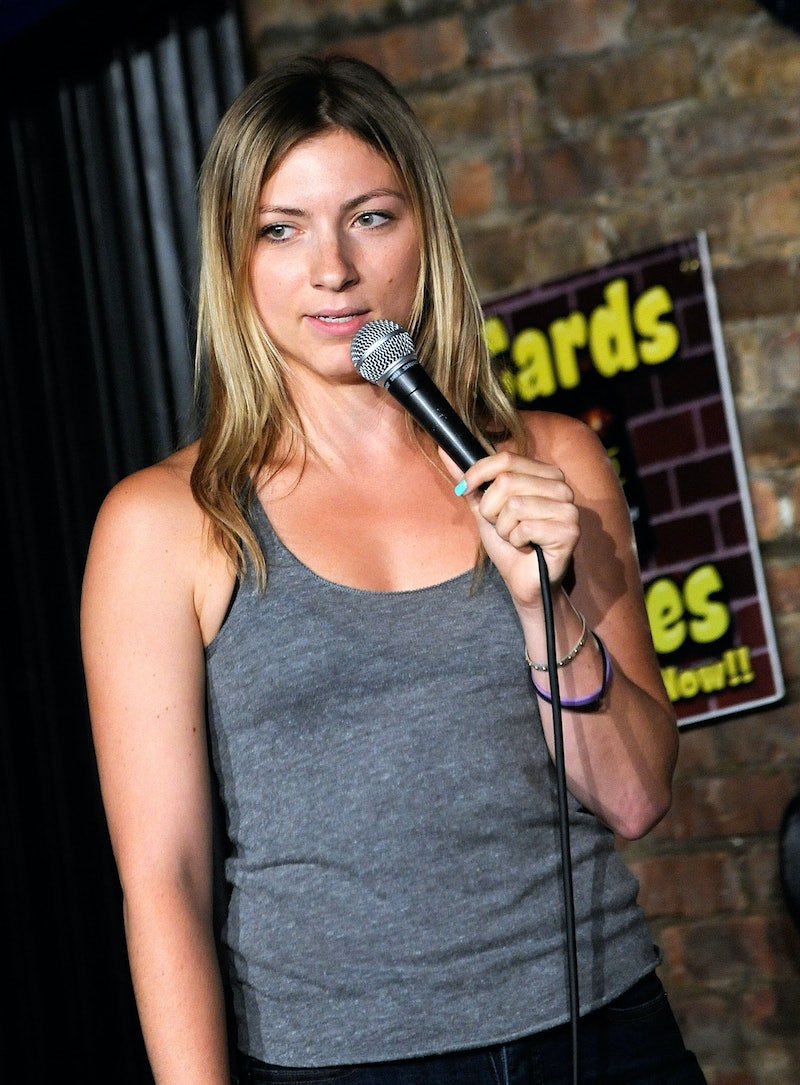 The host of the upcoming E! series We Have Issues , Annie Lederman, is a comedian and probably not a household name — but that's about to change. Because unlike the hosts of most shows, Lederman and her cohost, Julian McCullough, won't just be passive participants in the show. Instead, they'll be locked in a battle to figure out which comedian is the pop culture champion, competing in weekly challenges that will pit their joking abilities against one another. Competitive pop culture joking is something that runs through plenty of current comedy hits. The nonstop barrage of references and Twitter-style jokes from Difficult People to the nightly online competition for comedians to have their jokes picked for @midnight, being able to condense entertainment news into a clever quip is something that proves comedians know what they're doing.

Before she was the host of the new E! show, Lederman was a working comedian in Los Angeles. She began as a standup, worked her way up to guest gigs on shows like Chelsea Lately, and has used Twitter as a perfect avenue for the types of topical jokes that will be showcased on We Have Issues. But why not get specific? In advance of the show's Sept. 18 premiere, here are Lederman's best moments and jokes that prove We Have Issues is going to be yet another unmissable comedy.

Annie's set on Adam Devine's House Party was a key moment in getting her noticed by bigger audiences — and her joke about flossing has been reproduced as a mini-meme ever since (dental health is big right now!).

Lederman uses a combination of her surroundings and her drawing abilities to spice up her observational humor on Snapchat. And for those who don't follow her there, she posts her best doodles on Instagram too.

It's not surprising because Lederman doesn't seem like she could draw well, but because I doubt anyone would expect a witty comedian to also have the ability to sketch a highly realistic Kurt Cobain likenesses.

She Has A Great Friendship With Nicole Byer On Girl Code

These two have perfect chemistry, and I hope that Byer is a guest judge on We Have Issues. And if McCullough ever takes a day off, I nominate Byer as his replacement — I want to see her opinion about whatever Taylor Swift or Beyonce is doing.

She Has Amazing WCW & MCM Choices

Vida Boheme and Noxeema Jackson are everything I hope to be in life, and Lederman never settles for anything less than the best film and TV inspirations for her hashtag crushes.

Not only did Lederman call it out when she was being directly harassed, she also publicly shared it in order to encourage people to be better to women, and demonstrate how common it is for women to be targeted.

Another beautiful Girl Code moment from Lederman that captures the difficult standards of being a woman.

The Time She Perfectly Described The Internet

I'd say she nailed it.

She Recreated Magic Mike With A Packet Of Hot Dogs

OK, to review, Annie Lederman is smart, experienced stand-up comedian, who's killed it every time she's been in front of a TV camera, can draw, is a social media pro, and can turn picnic supplies into hilarious (and pun-based) sketches with equally genius collaborator Abbey Luck? The only thing I'm shocked by is the fact that she hasn't been asked to host a TV show before. We Have Issues and Annie Lederman is a combination I can't wait for.