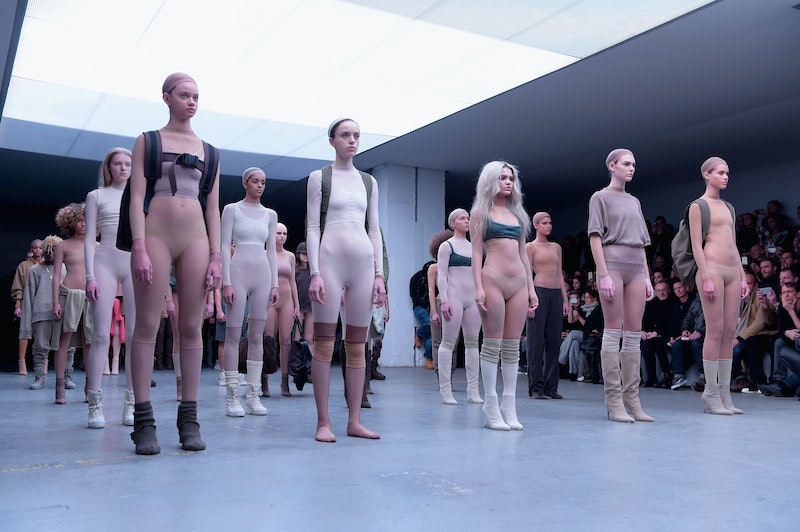 The moment we have all been anxiously waiting for has finally arrived. Kanye West's Yeezy Season 2 NYFW show just took place, and the highly anticipated presentation was almost identical to Kanye's Yeezy Season 1 show from last year. TBH, I didn't see that one coming.

With endless speculation from fans and industry leaders alike, the anticipation for the rapper's follow-up collection with activewear brand Adidas reached an all-time high, yet no one knew exactly what to expect. But for a fashion show that was kept more top secret than the White House (practically), I expected a whole lot more that what we got.

During the presentation, which took place on Wednesday afternoon, models stormed the stage in groups, dressed in bodysuits, hoodies, and all-around oversized threads in a variety of neutral shades — sound familiar? That's because this year's collection was practically a spitting image of the one Kanye showed last February.

After Kim Kardashian gave us a sneak peek of her Yeezy over-the-knee peep toe boots on Instagram, I was hoping for lots more new and unique designs. Sadly, I was disappointed to find out that not much has changed between the two Yeezy collections. But hey — if it works, it works, right?

Let's take a look at all the similarities between Yeezy Season 2 and Season 1, shall we?

Jenner made her NYFW debut at the Yeezy show last February, and once again walked in the show during this fashion week. This time around, though, she was joined by model gal pal Bella Hadid!

Nude stocking-like bodysuits dominated both shows, as you can clearly see.

Both collections had an eminent military-inspired themed executed through oversized draping as well as a neutral color palette.

The biggest surprise of Kanye's debut fashion show was the release of his then new song Wolves with Sia. He decided to continue the tradition this year, dropping new music with Ty Dolla $ign and Post Malone.

The resemblance is seriously uncanny. I would have loved to see a drastically different upgrade to the Yeezy Boosts.

Want more Kardashian/Jenner style? Check out the video below, and be sure to subscribe to Bustle’s YouTube page for more hacks and tricks!