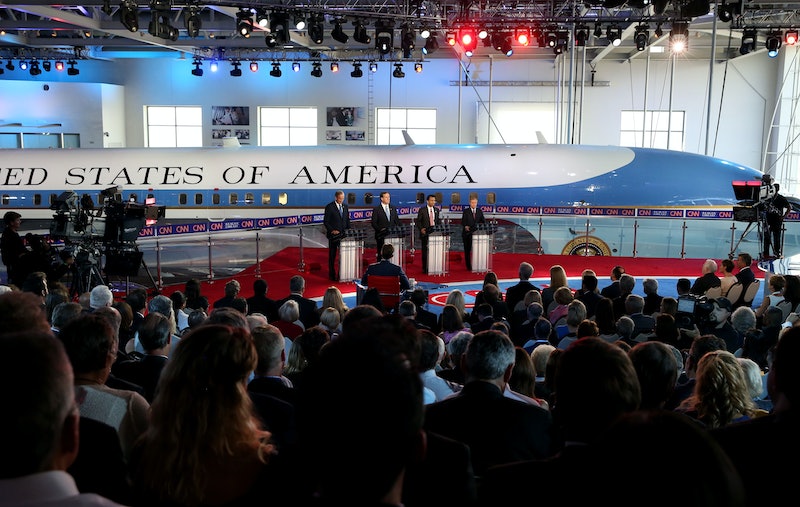 Although we have yet to declare a winner of the second GOP debate on CNN, there seems to be an obvious show-stealer. No, it's not Donald Trump and his slew of sexist comments. Rather, it's an 833,000-pound piece of transportation. During the second GOP Debate, the candidates talked politics in front of a plane. Yes, you read that correctly: a motherf*cking plane. Dubbed the GOP Debate Plane, this aircraft is a fixture in the in the Reagan Library, where the debate took place. Needless to say, the machinery paired with a group of 15 Republican presidential candidates has spawned a series of hilarious jokes.

This has been a heated debate, but chances are you've been distracted a few times by the plane, which was once used by President Ronald Reagan. I mean, who could blame you? As someone who isn't super well-versed in the world of politics, my eyes can't help but wander to that piece of patriotic machinery. I've even wondered if the candidates are channeling The Jelly Bean Man and his desire to demolish the USSR. And I'm not the only one who has been taken with the jumbo jet. Here is just a sampling of GOP Debate Plane jokes, which truly encapsulate the hilarity and awkwardness of 15 grown-ass adults debating in front of an aircraft.

The Ghost Of Reagan

Republicans on a Plane (or Not)