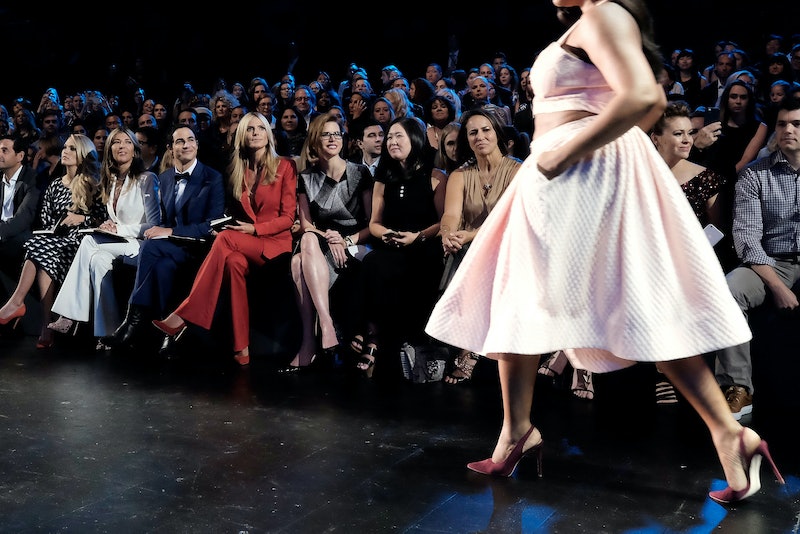 Project Runway, now in it's fourteenth season, has just made history, ladies and gentleman. One of the cycle's three finalists designed a plus size collection for the Project Runway finale runway show, which took place at New York Fashion Week, and it was modeled by plus size models — a first for the show! Judges Heidi Klum, Nina Garcia, and Zac Posen sat front row as each look passed by, looking especially appreciative and excited about the mold-breaking collection. The audience was feeling it too, erupting into applause when the first model hit the catwalk in her gorgeous ensemble and getting louder with each new look.

The tres ladylike collection was centered on soft pastels, and each look was topped off by a crown of flowers in complimentary colors.

This time around, the finalists presented their collections anonymously, without the fanfare, bows, and tearful thank-you's that used to be a big part of the whole package in previous seasons. It's all part of Project Runway's strengthened efforts to avoid spoilers, since the episodes, which air on Lifetime, haven't caught up to the final runway showdown yet.

So that means as of now, we don't know which designer from the show is responsible for the gorgeous plus size collection.

Whoever the designer is, he or she clearly understands a woman's body, and the fact that no matter what size she wears, that triangle right about the midriff is always a great focal point, and one that women of all sizes love to show off.

In the past, the show has brought back all the designers who were previously eliminated to show on the runway along with the three finalists, but this season, only six collections were presented, not ten.

Since it's anonymous, we don't even know if the other three collections were presented by former contestants, the finalists themselves, or external designers who have nothing to do with the show — perhaps it's the work of students or designers from past seasons?

Even though we still don't know who the finalists are, there does seem to be one obvious choice for the designer of the plus size collection: Ashley Nell Tipton, who designed her first plus-size collection in college and has delighted Project Runway audiences and judges alike with her style on the show, as well. In one of her videos on Project Runway's website, she showcases some of her favorite pieces she's created, and a piece she calls "The Boyfriend Dress" looks similar to this look from the runway:

In addition, the color palette of Tipton's past creations is similar to that of this collection, featuring tons of pastel-y pinks and blues with vintage, ladylike silhouettes. She also seems to favor cheeky, glamorous details, like the chains across the open back of a sweater the mentions in the video.

Other standouts include this cute, easy t-shirt dress.

This super-sexy, feminine lace number that could easily be Dolce & Gabbana

And this knock-out peachy number with a playful blue bandeau peaking out.

Whoever the designer is, he or she is going to be tough to beat; even judge Zac Posen couldn't contain his excitement about the collection, telling Daily News "It's a big moment for not only the runway, but New York Fashion Week."

If you're not caught up yet on Project Runway, now is the time. The finale airs in October, and with all the buzz around the fashion show at NYFW, you're not going to want to miss watching history being made.