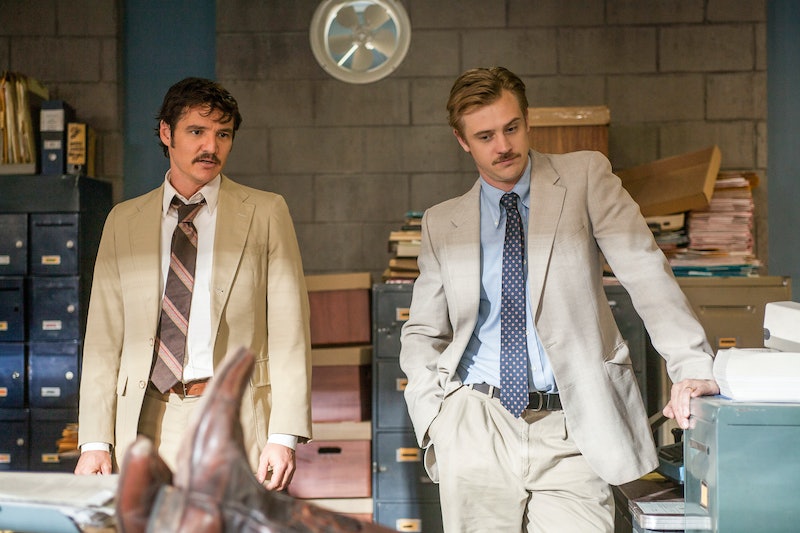 Slowly but surely, Netflix audiences are catching on to Narcos, a beautifully-made late summer addition. It's never to late, especially because Narcos has been renewed for Season 2. The first season ended with a cliffhanger and a promise. They have already cast Eric Lange as a CIA agent in Season 2. When the show comes back, what happens next? Luckily, since this is historical fiction, I have a pretty good idea.

Warning: unless you like to play fast and loose with spoilers, wait until you've finished Season 1 to read more. I'll be discussing not only events in the available episodes of Narcos, but historical events that could spoil future episodes as well.

When we last check in with "king of cocaine" Pablo Escobar, he's escaping into the woods while Murphy vows to stand over his dead body. What are my predictions for Season 2? It depends on how many seasons Narcos is planning. At some point, they're going to run out of story to tell. I hate to break it to you, but the real life Pablo Escobar died in 1993 in a gunfight. The story on Narcos started in 1989, and ends around 1991 or 1992, when Escobar was "held" in La Catedral prison. One of his many big armed prison breaks was in 1992. So, if we're following real events — there is a lot of story left to be told, but not a lot of time.

One thing I think will be a big part of Season 2 is Escobar's continued worries that he is going to be extradited to the United States. This is, in his mind, a dementor-like "fate worse than death" to be avoided at all costs. There is also, now that he has escaped, going to be a manhunt. In the early 90s, this manhunt involved not only Murphy, Peña, and the United States DEA but a special ops team that included US Navy SEALS, Delta Force, and the ISA. This is called a "Search Bloc" and they ultimately teamed up with a vigilante group called Los Pepes, which included members of the Cali Cartel like we met in Season 1, to take down Escobar. Teaming up with a former enemy to fight a common cause? That's the best kind of sequel material.

Plus, if Narcos pulls a Game of Thrones and offs Escobar mid-season, that doesn't mean the end of the DEA's involvement in Colombia. In fact, the Search Bloc was next sent to deal with the Cali Cartel, their recent allies. How dramatic is that? Were I writing this show, I would save that for Season 3. Based on the series' previously established attitude towards his "Robin Hood" persona, we'll probably see how the rest of Colombia responds to his passing. It would be interesting if the series continued to follow Virginia's character. Narcos is in an excellent position. With 10 episode seasons, they can stretch this story out or speed it up as much as they like. This is a multi-faceted world with endless characters and events to explore.