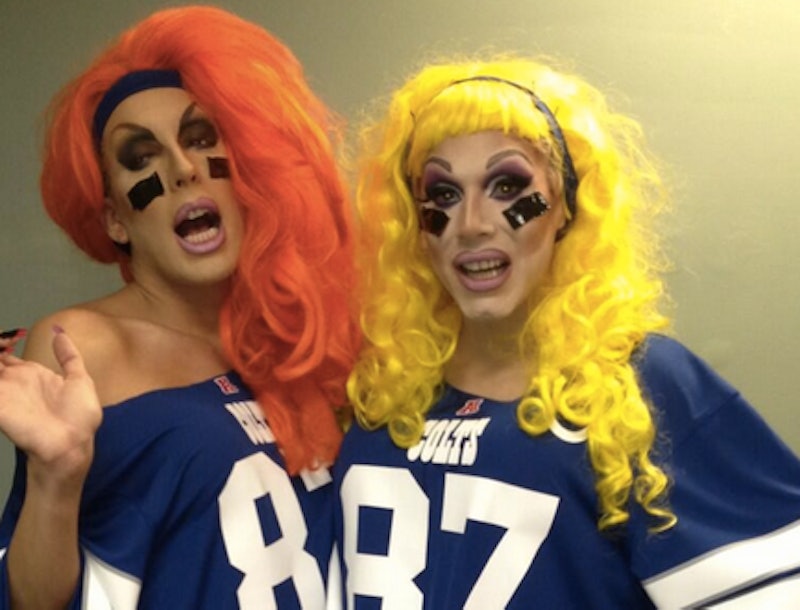 Girls and boys, we are looking at the end of an era. The time has come to don our most somber wigs, smear funerary glitter all over our faces, and wear waterproof lash glue because the world will never be the same again. Sharon Needles and Alaska Thunderfuck, of RuPaul's Drag Race fame, have broken up, and I just don't know what to do with myself anymore. Where can we look to for hope in this dark, cruel, universe if the most likable couple of drag are no longer a couple? I feel like I'm 10 and I'm being told that it's not anything I did but that mommy and daddy don't love each other anymore. The fact that I actually do have my real parents and that I don't know Alaska or Sharon personally is irrelevant. This is a tragedy and it hits very close to home.

I mean, remember those golden days? Sharon Needles won Season 4 of RuPaul's Drag Race and she was always saying adorable stuff about her boyfriend Alaska, and how it's hard for boys who do drag to find relationships but that they took solace in each other. Then Alaska finally, finally, got her chance to shine during the next season, and despite the obvious tension of having more or less gotten on the show as a result of Sharon's success, she persevered and in my opinion, TOTALLY should've won Season 5, (sorry Jinx Monsoon but suck it.)

I just don't understand how this happened, I thought big hair and big hearts were what made relationships work and now I almost want to break up with my boyfriend on principle because he might have big hair but will anything ever be enough if Alaska and Sharon can't get through?!?!?! I don't know.

More importantly, where does this leave drag? Sharon and Alaska were like the Obamas of drag and it should still be stressed that Alaska and Sharon were the first couple of Drag Race. And Alaska totes had Michelle Obama arms. The point is that they made drag couples adorable, classy, maybe even something to aspire to, and I want to say that a few of their wigs definitely resembled Bo, Sasha and Malia in shape, size, and probably weight.

The world will never be the same without Alaskaron Needlesfuck/Sharaska Thundereedles, and we should all hang black glittery clothes over our mirrors for a little bit, to mourn the loss of drag's leading couple. However, after that someone needs to convince Raja of Season 3 and Raven of Season 2 to shack up and live happily ever after, pronto.

It's the only way to fill the hole where Alaska and Sharon once resided, in our hearts.

More like this
'The Great British Sewing Bee' Semi-Final Is Extra Special For This Reason
By El Hunt
Winter 'Love Island' Will Be Back In 2023, ITV Bosses Confirm
By Maxine Harrison
Kim Kardashian Reveals The First Text She Sent To Pete Davidson
By Jake Viswanath
Pete Davidson Pops Up In This Hidden Scene From The Kardashians Season Finale
By Jake Viswanath
Get Even More From Bustle — Sign Up For The Newsletter