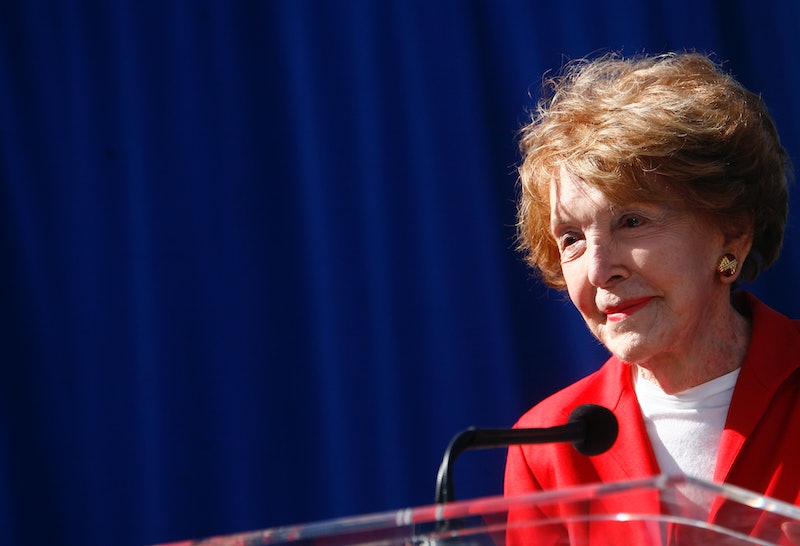 As the Ronald Reagan Presidential Library filled up with audience members for the second GOP debate of the primary season on Wednesday, CNN mistakenly confused one of them for Nancy Reagan. CNN showed an older woman sitting in the hall during its live broadcast before the debate began, with a header on the screen that read: "Nancy Reagan visiting debate hall." CNN anchor Wolf Blitzer later made a correction, saying: "We are told that the individual we showed you earlier was in fact not Nancy Reagan. We apologize."

Twitter users proclaimed that Reagan looked amazing for being 94 years old, as CNN showed a woman in a bright green sweater, large necklace, and spiky hair talking to another woman sitting beside her. CNN reporter Brenna Williams tweeted: "94-year-old Nancy Reagan looking fierce for a woman of ANY age." It was not in fact the former first lady, though — just a random woman who happened to look a little similar to her.

The Los Angeles Times reported earlier in the week that Reagan probably wouldn't be attending the debate in person, as she has largely stayed out of the public eye recently. However, she still personally invited all 16 Republican candidates involved in the two debates Wednesday.

No doubt everyone would love to see Reagan attend the GOP debate in Simi Valley, California, making faces at candidates' absurd comments and cheering on her favorite contenders, but CNN was a little too eager to spot her in the crowd. Not every older woman in a debate hall is the former first lady; just like how not every older man in the crowd with an intense combover is Donald Trump (although I would love to see pictures of all that hair).

The woman confused for the widow of America's 40th president might be offended by the mistake if she's not 94 years old. But she should be flattered that she somewhat resembles such a strong national figure, and that people watching the pre-debate broadcast thought she looked fierce. She got her 15 minutes of fame, and there are definitely worse people to be confused for — at least she isn't a Trump lookalike.

Although the woman shown wasn't Reagan, I'm sure the former first lady still looked amazing while watching the debate from home. I mean, how could she not? She is Nancy Reagan after all.