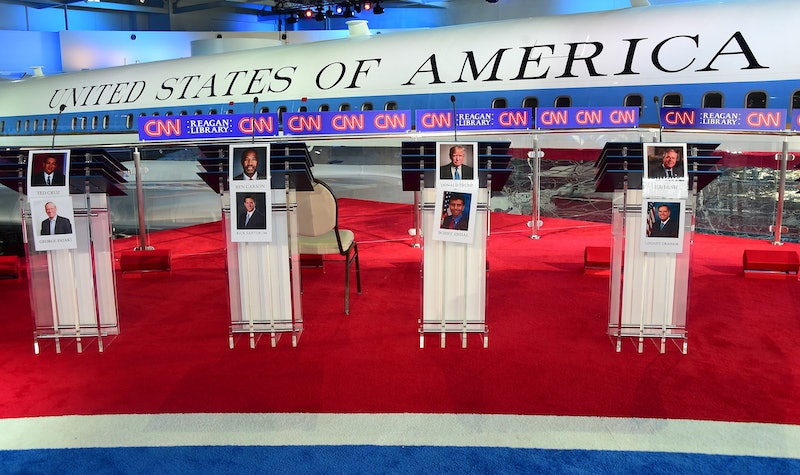 If you're watching Wednesday night's GOP debates, then this thought probably occurred to you: "Hey, what is with that enormous plane in the background? The one that says 'The United States Of America' on it, and which looms in the background of every shot?" Well, there's a very simple answer: It's Ronald Reagan's old Air Force One, which he used to jet around the country and the world while in office from 1981 to 1989. Though if you've been watching Republican primary debates for a while, you might recognize its eye-catching presence. That plane is nothing new; though it's still kind of surprising whenever you see it.

The Reagan Air Force One made a similarly dramatic appearance back in 2007, when Mitt Romney and John McCain were locked in a bitter battle for the GOP presidential nomination. Notably, it actually wasn't only Reagan's Air Force One — as the Christian Science Monitor notes, it also served Presidents Nixon and Clinton, as well as both Bushes (the latter one very briefly). Then it was deconstructed, shipped off to Simi Valley, and reconstructed to be enshrined at the Reagan Library. Reagan was the one who logged the most miles in that plane, so obviously he's the president most tightly associated with it these days.

There's no denying that it cuts an impressive figure in the background. And it's very thematically appropriate — just as Ronald Reagan's image (if not his precise record) constantly looms over the modern Republican Party and it's messaging, his old behemoth of an aircraft dwarfs all the candidates on stage.