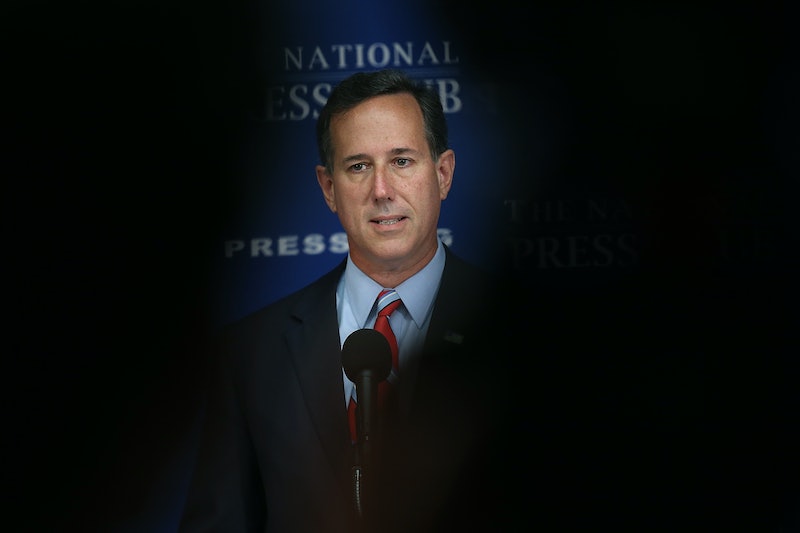 In his opening statement at the second GOP debate Wednesday, Rick Santorum immediately brought up his pro-life beliefs. Although it was obvious that he had rehearsed his comments over and over again, Santorum fumbled over the word "abortion" when he said that he led the fight on partial-birth abortion. Is he so opposed to abortion that he can't physically say the word?

After saying "Hi," Santorum's first sentence in his opening statement was: "I led the fight against partial-birth abortion." The fact that Santorum wasted no time mentioning his record fighting abortion rights shows that it's one of his main campaign agendas, but fumbling over the most crucial word didn't look great for the presidential hopeful. While it could have just been an unfortunate coincidence, his inability to say "abortion" gave the impression that Santorum is uncomfortable saying the a-word. Nonetheless, the Republican wanted to remind viewers of his staunch pro-life views (like anyone could forget) within his first minute of speaking at the mini GOP debate.

Santorum's fight on partial-birth abortion was referring to the national Partial-Birth Abortion Ban Act of 2003, which bans intact dilation and extraction abortions, that he introduced in the Senate and championed until it became law. Throughout his 2016 campaign so far, Santorum has used this bill to prove his commitment to stopping abortions. His website says that his daughter Bella, who has rare genetic condition known as Trisomy 18, has strengethened his belief that "every life matters" and he mentioned her in his opening statement as well.

It's no surprise that Santorum was quick to bring up his fight against abortion in the mini GOP debate, but his speaking gaffe made it even harder to listen to.