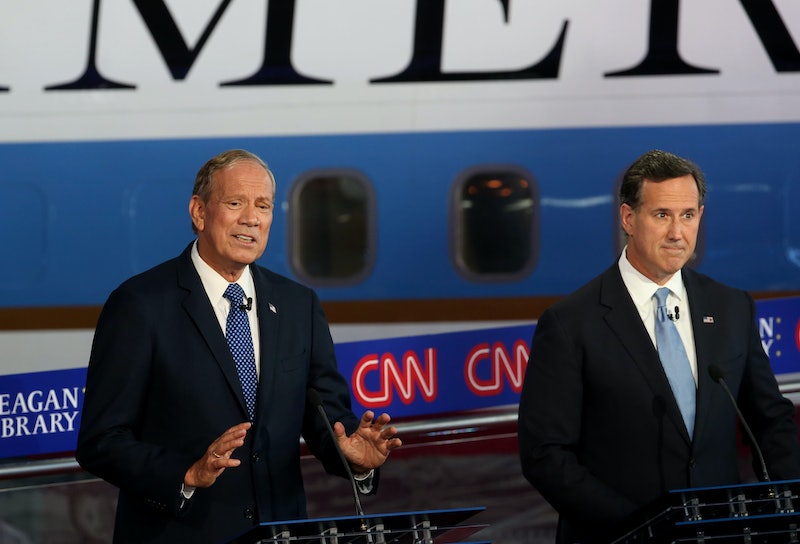 The four GOP presidential candidates who were invited to a mini-debate before CNN's main event spent the first 20 minutes hating on Donald Trump, who is leading in the polls for GOP candidates. All of the candidates condemned Trump's style of campaigning, as well as his plans for the country should he become president. But South Carolina Sen. Lindsey Graham in particular made it really clear that he doesn't like Trump, and former New York Gov. George Pataki gave a lengthy rant about why Trump should not be the focus of the debate or the Republican presidential race.

Graham called Trump a "wrecking ball," and responded to the question "What are your thoughts on Donald Trump?" with "I think we need to destroy ISIL." But Pataki really took home the Trump-hating. When debate moderator Jake Tapper asked him whether he would support Trump if he gained the Republican party's nomination, Pataki (who, as Tapper pointed out, had tweeted that he would not support Trump if he won the nomination) affirmed that he would not support Trump. Then, when Tapper asked him whether he would "seriously vote for" Hillary Clinton over Trump, Pataki finally said that he would vote for the Republican nominee. But then Pataki got super sick of talking about Trump, and said "Donald Trump is not going to be the Republican nominee":

This is an important election with an enormous number of challenges facing the American people, and the first four questions are about Donald Trump ... I will vote for the Republican nominee, but let me say this flat out: Donald Trump is unfit to be president of the United States or the Republicans' nominee.

And Pataki wasn't the only candidate in the mini-debate who believed that Trump should not be the nominee, or a serious candidate for president. Louisiana Gov. Bobby Jindal said that Trump is "a narcissist who only believes in himself." Later in the debate, Jindal added to those thoughts, and he didn't hold back:

Instead of trying to convince people that Trump is not a conservative, I have told voters the truth — he is a narcissistic egomaniac who will waste the conservative movement’s last, best chance to Make America Great Again, by gifting the White House to Hillary Clinton.

Some of the candidates, like Graham, didn't issue too many pointed attacks against the business mogul. Instead, Graham made it clear that he believed Trump shouldn't be the focus of the debate, and Pataki passionately seconded that idea. Regardless, all of the candidates seemed to be totally over The Donald.