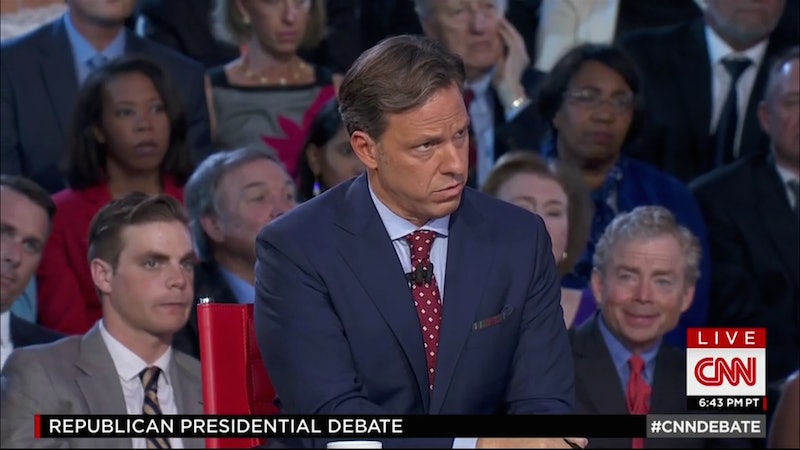 A political debate is sure to raise a lot of questions about the candidates, the political spectrum, and America, but this GOP debate has raised a new question in viewers minds — who's the guy behind Jake Tapper? This mystery debate viewer is winning the Internet and might give Trump's Google searches a run for their money.

The young mystery man is sitting directly behind Tapper, the debate moderator, and can occasionally be seen when the camera focuses back on Tapper. The Internet is desperately attempting to identify the man — calling in aid from BuzzFeed, as well other online platforms. But so far the search has been fruitless.

It's not surprising that the mystery man has stolen the show away from the Republican candidates. Aside from being goaded by Tapper to yell at each other, the debate has been relatively low-key. So, of course, Twitter users are finding other ways to occupy their time.

Here's what we know about "the guy behind Jake," as Twitter is calling him. He's young. He has some extremely fierce eyebrows. His suit looks impeccably well tailored, and his furrowed brow indicates that he might not be super enthused by the candidates' performances. Unfortunately, his name is a mystery. But Twitter is on the hunt.

No word yet on who this man is, though the leading theory is that he may be an angry, bored vampire — which honestly wouldn't be the weirdest thing to happen at this debate.