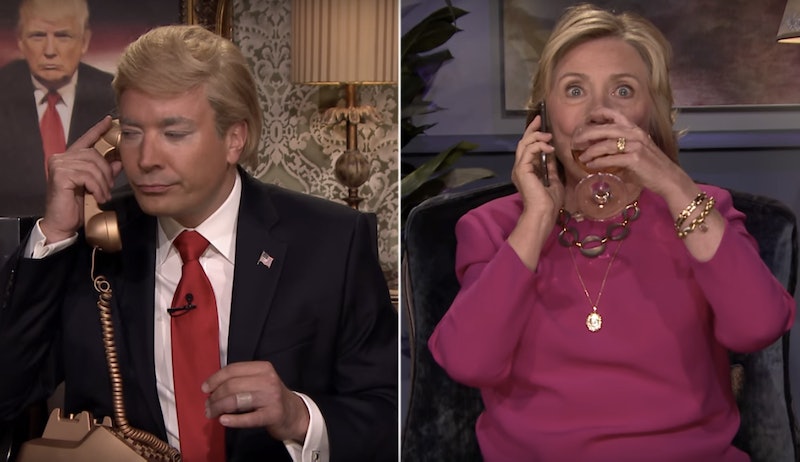 Apparently, the Republican front-runner is pretty quick on his feet. Just as the GOP debates were winding down, Hillary Clinton's opening sketch on The Tonight Show featured her chatting with Donald Trump on the phone. Never mind that Trump looked suspiciously like host Jimmy Fallon, who may or may not have a history of dressing up as the Republican billionaire. But the segment allowed Clinton to clear the air with Trump, as well as set herself up for some choice Trump jokes, such as making fun of his multiple weddings.

During the call, "Trump," reeling from the recent debate, decided to take over the interviewing questions for Fallon. "You recently said, 'Mr. Trump insults and dismisses women.' But tell me, what would you do to help women in this country?" the host / fake billionaire asked. "I’ve spent my entire career fighting for women’s rights," Clinton responded. "I’ll push for equal pay in the workplace, I’ll protect women’s health and reproductive rights, and I’ll make quality, affordable childcare a reality for families."

The politician and the comedian didn't waste any time getting a dig in on Trump and his notorious treatment of women during the campaign. She asked "Trump" about his stance on women's issues. "I know a lot of women, and they all have issues," the comedian responded.

The highlight of the skit, however, was when Fallon did his best impersonation of Trump's weird cadre of noises. "You sound like a robot. 'Bleep, blop blorp, does not compute,'" fake Trump said, before going on to give the candidate some advice on how to win her campaign. "First: Yell. I yell all the time. Next: Pick three things everyone loves, and say you hate them. Watch: Puppies? Stupid. Rainbows? Total losers. Fall foliage? Tree puberty." At this point, Clinton took a page out of Lindsey Graham's book and started drinking.

This was Clinton's first appearance on The Tonight Show during her presidential campaign, and her opening foray into the late-night talk show circuit. Trump — the real one, not the Fallon impersonator — preceded her as a guest on the show last week. The appearance is part of Clinton's new approach to showcase her lighter side and allow her humor to shine through. The Fallon skit — though light — may be a taste of the Clinton to come.