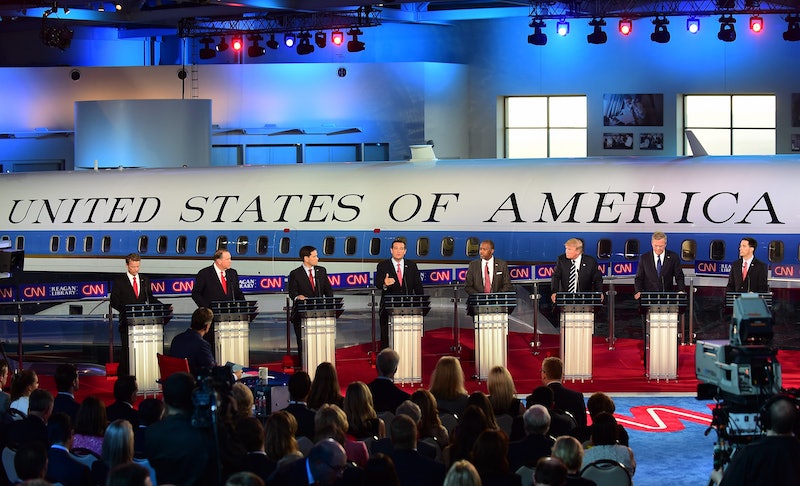 If you hold a Republican presidential debate at the Ronald Reagan Library with his Air Force One right behind the candidates, get ready for a lot of references to Ronald Reagan. But exactly how many times did the candidates mention Reagan during their second debate? Let’s go through and count.

It's no secret that Ronald Reagan is a beloved conservative hero (the first GOP debate saw his name brought up 14 times). Republicans credit him with ensuring years of economic prosperity and cementing U.S. power on the international stage. Even so, The Gipper was evoked with extraordinary frequency Wednesday night for various purposes, from self-comparison to (occasionally dubious) historical references to rhetorical poses. Over the course of the three-plus-hour debate, the candidates managed to mention their conservative hero on topics ranging from self-promotion to immigration to abortion to who should be on the $10 bill.

Many of the candidates have touted themselves as the next Reagan coming so it's little surprise the actor-turned-commander-in-chief was so frequently cited as a hero. So here goes, a count of how many times the GOP presidential candidates mentioned Ronald Reagan in their second debate. (We discounted references to the library unless it was directly related to the former president.)

Bush's first attempt at honoring Reagan actually got cut off by Tapper, but he would go on to reference Reagan five times in total, including touching on the "Reagan Rule" to defend his decision to defund Planned Parenthood while governor of Florida. Bush said he wanted to take the Reagan approach should he become president, which he characterized as "hopeful" and "optimistic" (compared to Donald Trump approach"):

We’re at a crossroads right now. Are we going to take the Reagan approach, the hopeful optimistic approach, the approach that says that, you come to our country legally, you pursue your dreams with a vengeance, you create opportunities for all of us? Or the Donald Trump approach? The approach that says that everything is bad, that everything is coming to an end.

He didn't mention Reagan by name, but he did use the library as a segue to laud the former prez:

It occurs to me as we sit here in the Reagan Library, most of us would like to pay tribute to a man who didn’t get elected by telling everybody how great he was. He got elected telling everybody how great the American people were. And he empowered them to live their dreams, which is what I’d love to see us do by no longer penalizing the people who are out there working because they are taking a gut punch right now.

Considering that Christie once reportedly name-dropped Reagan six times in one minute, a single reference is pretty surprising:

When asked how he envisioned America's future, Paul cited the oft-told story of how a young Rand met Reagan:

I met Ronald Reagan as a teenager. My family were big supporters of him when he ran against Gerald Ford. it was a big deal because he was the grassroots running against the establishment. And, how he stood up and said, you know what, this is something new that our country needs, and our party needs.

During his introduction to the American people, Kasich commented on the massive aircraft sitting behind the candidates in an attempt to put himself literally side-by-side with the former Republican president:

I think I actually flew on this plane with Ronald Reagan when I was a Congressman, and his goals and mine are pretty much the same: lift Americans, unify, give hope, grow America, and restore it to that great city on a hill. Yes, he was a great one, and I learned much from watching him. The most important thing, hope to Americans, unify, lift everyone in America.

Rubio has often cited Reagan as a personal hero, and apparently the Gipper used to be his grandfather's hero, too. Rubio said that his Cuban immigrant grandfather "loved Ronald Reagan," and later explained just what made Reagan a great president in his eyes:

One of the things that made Ronald Reagan a great president was that he understood that America was a unique nation, unlike any other that had existed throughout human history... He just didn't believe it, he acted on it. That's why bringing down communism was so important to him.

No Reagan mention here, but she did namedrop Steve Jobs.

Cruz went to the pretty straightforward unimaginative route to celebrate the 40th president of the United States:

Reagan was a lifelong Democrat before switching to the Republican Party in 1962. Carson apparently shares that narrative:

I was a radical Democrat before I started listening to Ronald Reagan. And he didn't sound like what they said Republicans were. He sounded logical. And I hope that I sound logical also.

Walker tied with Bush with the most Reagan nods. He first introduced himself by thanking Nancy Reagan for hosting, and then praised Reagan, saying, “He knew how to go big and go bold,” He then compared himself to the Gipper: "… and that’s what I did when I took on the status quo in my state.” It's a legacy that Walker seems to think he'll follow, which includes a come-from-behind win in the election:

A lot of people forget this, but just a few days before that election in 1980, [Reagan] was behind in the polls. I think what changed things was people didn't want to hear what was bad about America, they wanted to hear what would be better. Ronald Reagan wasn't just a conservative Republican, he was an eternal optimist for the American people.

No surprise, Trump stuck to the script and talked about Trump.