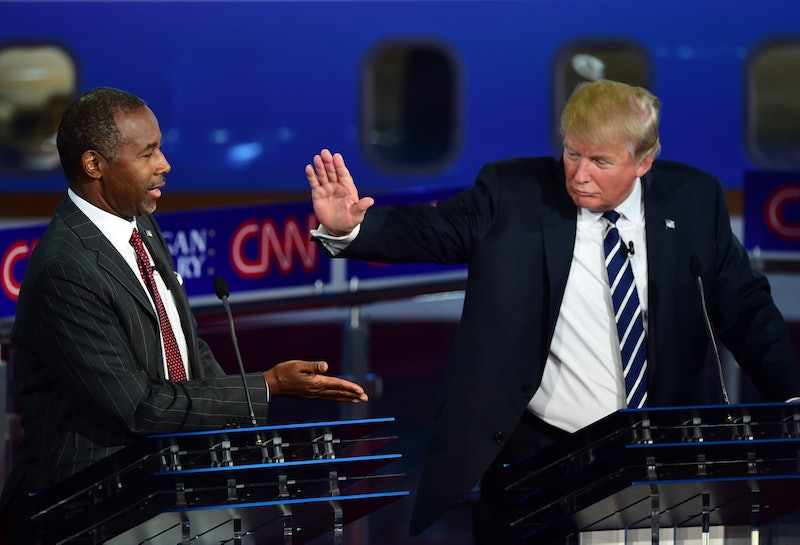 Wednesday night's debate among Republican presidential hopefuls was memorable for a variety of reasons. Whether the candidates were squabbling over who defunded Planned Parenthood first or name-dropping their famous acquaintances, there was certainly never a dull moment. One of the most awkward moments of the second Republican debate, though, was when Ben Carson denied Donald Trump a true high-five. (It was not subtle.)

At one point in the debate, Trump turned to Carson, who was standing to his right and held up his hand in an exaggerated gesture, inviting the neurosurgeon to join him in an enthusiastic high-five. Carson's reaction, however, appeared to be one of mild annoyance. Carson refused to put in the effort to lift his arm to meet Trump's, so the business mogul lowered his arm to join Carson in a half high-five, half handshake instead. The whole move resembled some sort of "down low, too slow" joke from middle school. From the expression on Carson's face, it's clear that he'd much rather be speaking at his podium than shaking Trump's hand.

While tonight's incident takes the cake as the worst high-five, it was still just one in a series of awkward high-fives throughout history. There is truly nothing worse than an unreciprocated high-five, as these men and women can attest.

2. The Time Ryan Seacrest Attempted To High-Five A Blind Man

When Seacrest finally registered the man's cane, he reached down and shook his hand, but the mistake had already been caught on camera.

3. The Time Tina Fey And Amy Poehler's Hands Missed Each Other

Fey and Poehler are always a dream team (#SquadGoals), but we can't help but cringe at this high-five gone wrong.

4. The Time A Community College Student Denied Chicago Mayor Rahm Emanuel's Offering For A High-Five, Or Even Just A Handshake

The oblivious student refused look up from his phone, so who knows if blowing off Rahm was on purpose, or if the student just had no idea who he was being rude to.

It's up for discussion whether this is one of the most awkward high-fives ever, but tonight's GOP debate was so full of awkward high-fives, we had to include it on this list. After Trump had joked about Bush's enthusiasm earlier in the evening (as opposed to being "boring"), Bush put that enthusiasm to good use by powerfully slapping Trump's palm while grinning.

Maybe the candidates at the next debate should just spare themselves the trouble and agree not to high-five one another — at least not on camera.