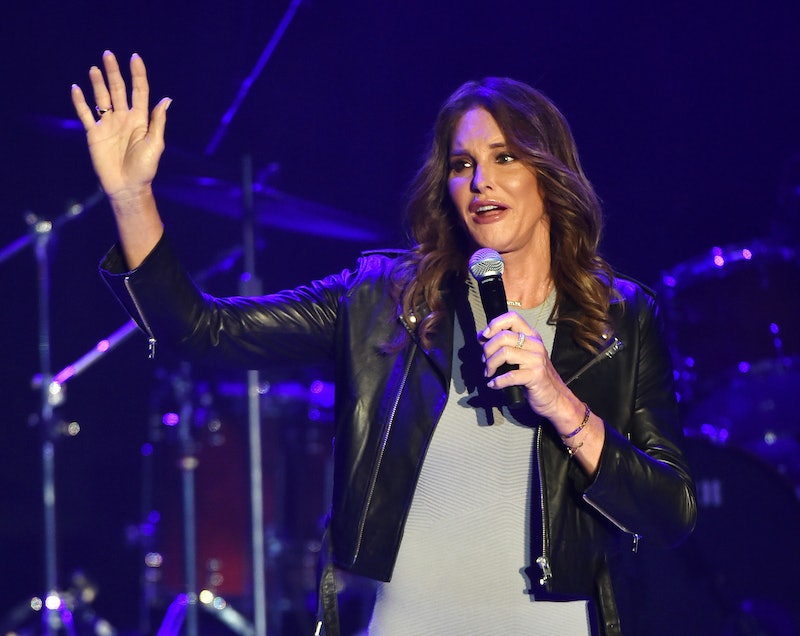 It's been almost five months since Caitlyn Jenner came out as transgender in her highly-watched interview with Diane Sawyer. It's been about three months since her racy photo spread was released in Vanity Fair announcing her new name to the world. It's been about two months since her reality show, I Am Cait, premiered, and about a week since it concluded its first season. It seems like we can't make it through a full 24 hours without seeing some kind of coverage about Ms. Jenner. If we thought the rampant speculation about her gender identity reached the extremes of media obsession before she came out as transgender, then the coverage on her afterwards sets a new standard for celebrity media saturation — and I'm not sure that's a positive thing for the trans community.

In the immediate aftermath of Jenner's coming out, many hailed it as a huge victory for the visibility of the transgender community. It would to be hard to argue that trans people aren't significantly more visible because of Caitlyn Jenner. More than 17 million people watched her Diane Sawyer interview, which is certainly the largest audience a trans person has ever garnered on television. A quick Google news search for "Caitlyn Jenner" turns up over 3 million hits. A similar search for "Laverne Cox," arguably the second most famous trans woman in media, turns up just 53,000 hits. If nothing else, that much conversation about Jenner means the word "transgender" is known to far more people than it was just six months ago. She's also put a human face on an issue that's generally pretty foreign to the bulk of the American population. By recent estimates, only about 10 percent of people in the U.S. think they know at least one transgender person, so Jenner's popularity makes at least some forward progress in making the transgender community into something more than a nameless, faceless minority.

There's also no arguing the fact that Jenner has at least made an attempt to push forward some trans political issues. In her speech at the ESPYs accepting the Arthur Ashe award, she discussed the recent rash of suicides among transgender teenagers. She discussed the murder of two trans women of color in her well-read blog. Her reality TV show featured an accomplished and brilliant group of trans women, including several trans women of color. She was even moved enough by a young trans woman's struggles to fund nursing school that she offered to pay her tuition. Jenner is clearly a kind person, and in a lot of ways, her heart is in the right place.

Unfortunately, much of the press surrounding Jenner has become exactly what I feared it would be when she came out — an enormous distraction from a lot of the other things going on in the transgender community. While the mainstream media was focused on the goings-on of Ms. Jenner, it completely ignored the enormous spike in murders of trans women of color. The press she and her TV show have received has drowned out focus on what is arguably a far more groundbreaking series, I Am Jazz, which focuses on the considerably more common struggles of a teenage trans girl. What started out as an opportunity to gain some visibility for a otherwise very invisible community has turned into a constant circus of press in keeping with Jenner's Kardashian connections. Considering the overall tendency of the mainstream media to treat transgender people as spectacles instead of human beings, I suppose it's not really that shocking.

One of the most immediately pressing problems of that circus is that Jenner has been made the de facto face and spokesperson of all things trans. Her experiences and the manner in which she came out are being falsely extrapolated to represent the rest of trans women. However, Ms. Jenner's experiences with both her transition and life afterwards do not even remotely reflect the reality that most trans people face. Very, very few of us have the financial resources or social capital that Caitlyn Jenner has enjoyed to smooth the path to living authentically. Jenner didn't face the homelessness, job discrimination, violence, harassment, and abject poverty that most trans people (particularly trans women of color) must consider when they come out as transgender. We cannot elect to simply drop out of public life like Jenner did during the awkward, complicated phases of transition where we are often the most visible and most vulnerable. We cannot afford to pay surgeons to alter our faces and bodies to make them more palatable for the cisgender public in the way Jenner could. We don't have teams of makeup artists, hair stylists, fashion designers, and professional photographers to make sure we're always looking our best. We weren't greeted with magazine covers when we shared our new names.

However, Ms. Jenner's experiences with both her transition and life afterwards do not even remotely reflect the reality that most trans people face.

The problem isn't just that Jenner's experiences are very different from the bulk of other trans women. Rich people have transitioned before her. The issue is that Jenner is the most visible trans person on the planet, and for many many people, the first trans women they're aware of. That means she's setting a standard for rest of us in the minds of cisgender people, a standard that most of us cannot or do not want to attempt to achieve. While Jenner's reality TV show at least made a passing attempt at sharing the experiences of other trans people, it was not widely watched, leaving Jenner alone in the spotlight. The standard set by Jenner will leave many, many trans women being judged by their friends, family, and coworkers for failing to fall in line with expectations that they be feminine, perfectly styled, and impeccably dressed, or for not doing everything possible to make their presentations as palatable as possible for the general cisgender population. The fact is many trans women (myself included) do not fit traditional notions of femininity, and a large portion of us don't meet or aren't interested in cisgender standards of beauty. That doesn't make our womanhood any less real, or our identities any less valid and worthy of respect.

If the standard Jenner's visibility is setting for trans women's appearance is troubling, the the standard she's setting for our behavior is even more concerning. In an interview with Matt Lauer not long ago, Jenner made a particular point to explain she didn't have a problem with people using the wrong name or pronouns for her and denigrated those who would expect more, saying:

We now have the most visible trans woman in the world telling people that getting trans people's pronouns rights isn't that important, as well as implying that the rest of us are somehow intolerant for expecting this very basic courtesy. Jenner is dipping into the basest of respectability politics, and tossing all of her sisters under the bus. In the same interview, Jenner also shared that, while it upset a large number of trans women, she didn't have any problem with the rather tasteless mass market Halloween costume that had been created of her, saying: "I don't think it's offensive at all. I know the [trans] community does, and [the company has] gotten a lot of criticism for doing it. I think it's great." At Jenner's standard, we should all endure the mocking of identities as little more than costumes, worthy of a good laugh, and those of us who object will be labeled as "too sensitive" or "not having a sense of humor," and we'll be mocked as participating in "outrage culture" or enforcing "political correctness." The transgender community is a beautifully diverse group of people, of numerous sexual orientations, gender presentations, skin tones, political affiliations, and personal philosophies, and the media obsession with Caitlyn Jenner is the most myopic view of us that can be constructed.

We now have the most visible trans woman in the world telling people that getting trans people's pronouns rights isn't that important, as well as implying that the rest of us are somehow intolerant for expecting this very basic courtesy.

Perhaps the more insidious danger here is that people are beginning to get fatigued by the wall-to-wall coverage of Jenner's life in the same way that they've grown tired of the rest of the Kardashian clan. Given that Jenner has functionally become a paragon of transgender people, the burn-out with Jenner could very well mean a burn-out on transgender issues as a whole. That would be a deeply wounding loss for our community, just as our struggles for acceptance and legal protections were finally gaining a toehold. The last thing we need is people tuning out or clicking away from something related to transgender political ambitions simply for name-checking Jenner, or just ignoring the issues altogether because the word "transgender" has become synonymous with "Caitlyn Jenner." Worse yet, the non-stop barrage of Jenner could drive a backlash against other trans folks and turn people off from our cause. Is a person sick to death of coverage about Jenner going to treat their trans coworker with sensitivity and kindness? I worry the answer will occasionally be no.

What Caitlyn Jenner has given the transgender community is a historic level of visibility. Cis people are now very aware that trans people are living and moving among them. But, visibility will only get us so far, especially if it's laser-focused on a single person whose struggles are comparatively few. Visibility, in and of itself, is not progress. Trans women of color are still being murdered at an alarming rate. Trans teenagers are facing an incredible homeless crisis. It's still perfectly legally to discriminate against trans people in 30+ states. Trans people are still struggling to get competent healthcare and access transition-related services. Forty-one percent of trans people are still attempting suicide. Continuing to center Jenner in all discussion of transgender issues will only hold us back.

The next steps will not be accomplished by admiring Caitlyn's latest designer dresses. They'll come from throwing the spotlight on the rest of our beautiful, colorful community. Show our activists, our advocates, and those at the front line of pressing for change. Feature our artists, our writers, our actresses, and our speakers. Talk to our brave young people and our endangered elderly folks. We are so much more than just Jenner, and we are fascinating beyond the spectacle of our transitions.

More like this
An Honest Review of MeUndies Boxers, According To A Non-Binary Person
By Megan Lasher
There’s A Brand New Drag Race Spin-Off & It’s Dropping Very Soon
By Sam Ramsden
Mel B Speaks Out Against Domestic Violence In A Powerful Speech
By Sophie McEvoy
The 'Heartstopper' Cast Were Spotted Filming In A Major City
By Nola Ojomu and Sam Ramsden
Get Even More From Bustle — Sign Up For The Newsletter