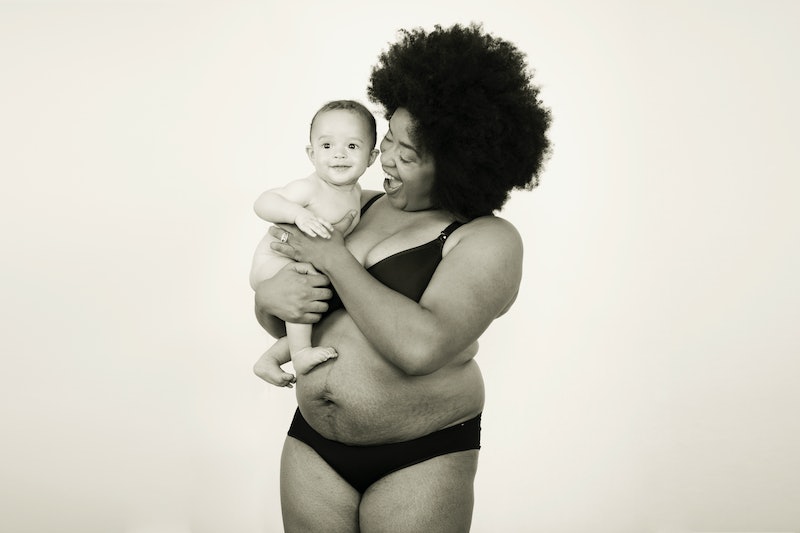 Get your body back in just six weeks! Lose the baby weight! Women's magazines are still filled with this kind of drivel, and it's no wonder: women in Hollywood with personal trainers seem back to their "pre-baby bodies" in mere weeks, and all too often, women hold themselves to the same unrealistic standard.

The truth is, no matter how it appears on the outside, your body is never the same after having a baby — nor should it be. In her new book, The 4th Trimester Bodies Project: Celebrating the Uncensored Beauty of Motherhood, photographer Ashlee Wells Jackson made it her mission to depict the beautiful and diverse realities of mothers' bodies.

Jackson started the project after the devastating death of one of her identical twin daughters to Twin to Twin Transfusion syndrome. She came home and began photographing women immediately, in an effort to heal.

"My clients shared insecurities and pointed out supposed flaws that I never could have seen," Jackson writes in an email to Bustle. "They compared themselves to the tabloids, bounce-backs, and 'should-bes'. They were perfect, but felt so broken, and it suddenly hit me — I was too. I hadn’t looked at my midsection in months. My son’s belly squeezes caused me to cringe." Jackson continued photographing other women, as well as her own post-baby body, and found the process healing.

"Women and mothers have been told for so long to erase the effects of pregnancy, childbearing, and motherhood the second the shift happens. When we’re told our worth is tied to our beauty it’s easy to understand why those statements make sense. Except that they don’t. These shifts are markers of a transition that is normal and therefor beautiful. As a society that’s been told we need to see it to believe it, normalization comes through visual images," Jackson writes.

Amen. The images speak for themselves.