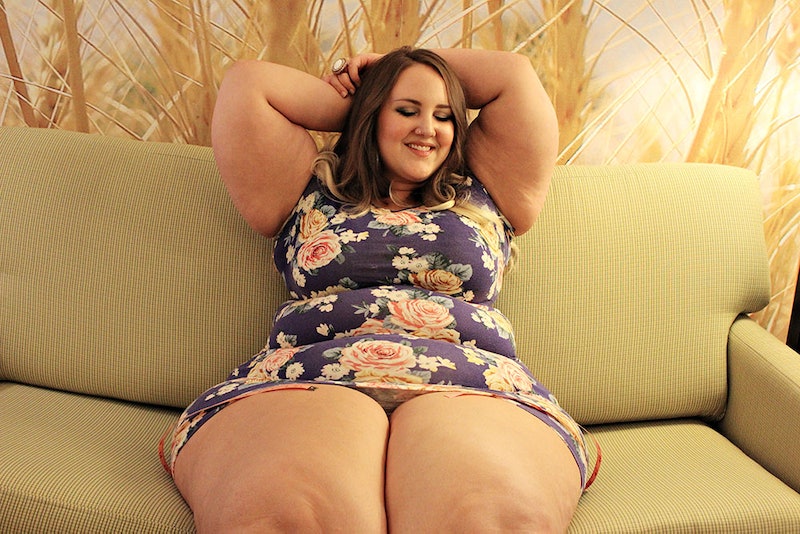 Here's the thing: I owe a lot of my self love, confidence, and passion towards body positivity to this term. Not only do I completely relate to it (I am a big, beautiful woman, y'all), but I also respect (madly respect, honestly) the term for being so deeply connected to the very root of the body positive community.

Many years ago, when the world-wide-web was introduced to homes everywhere and the sounds of dial-up (and frustrated parents who couldn't use the phone) were heard across the land, a young, teenage me discovered a hidden world: An online, BBW world. Up until this point, I had always felt quite alone in the universe when it came to being a fat girl. Sure, there were a handful of fat people my age sprinkled here and there, but they were few and far between. So one night, sitting at my computer in the dark basement with only the neon glow from the screen for light, I typed in the words: Big girl chat room into the search bar.

I never knew that there were men out there who could actually find me attractive. I always believed (as you do when you are young and insecure about your body) that if I did happen to find a man who loved me, then he simply "wouldn't mind" that I was bigger. He would tolerate me, but not actually desire me. Before I discovered the online fat community, I had tried to turn my sexuality off. Fat people weren't supposed to be sexual beings, after all. We were disgusting, diseased, shameful, and unattractive. I felt I had to hide my entire sexual identity because of this, never allowing myself the freedom of connecting with my body in a way that would allow me to connect with my sexuality.

First, I learned that the amount of plus size people (and the people who are attracted to them) in this world is a lot larger than I ever imagined. As the Internet became more and more popular and commonly used, I watched the community grow rapidly. Suddenly, the fat politics community started gaining ground, and I even saw (quite literally) "the birth" of the plus size fashion community a little later down the road.

Second, I learned that I was wrong regarding how people saw me. I used to walk around feeling ashamed of my body, like everyone believed I was ugly or disgusting. After being a part of the BBW community, however, I encountered a plethora of men and women who happened to believe that not only was I beautiful, but that I was hot, too. "Hot" was never something I had been called before, nor had I ever considered myself in this way, either. But when you're told something enough, you finally start to believe it. While validation towards yourself shouldn't depend on validation from others, the comments I would receive from people (and yes, that sometimes included "creepy" ones from guys) helped flipped my entire perception of the world.

Having a big enough community expressing their natural love and appreciation for the plus size body speaks volumes towards our fight for equality. Aren't the people who find fat women beautiful part of the conversation, too? Don't they also play an important part in this movement of ours? They are our cheerleaders, our supporters, our fighters, our partners.

When it comes to my own personal relationship, I'd much rather be with someone who not only loves me for who I am, but also desires me and the body I have worked so hard to love and be proud of. I identify as a plus size, fat woman, and for me, I want that to play some kind of part when it comes to my sexuality (and not something that is just tolerated or simply ignored).

I'm in no way suggesting that the only place to discover your own confidence and self worth should be via in the eyes and opinions of men (or others in general), of course, because that's never going to be the case. People find inspiration for confidence and self worth in all kinds of different ways, and each person has their own experiences that have helped to shape how they feel about themselves in relation to the world. What I am suggesting, however, is that there is value in seeing yourself as beautiful, attractive, and sexual through someone else's eyes (especially when you may not have ever experienced that kind of sensation before).