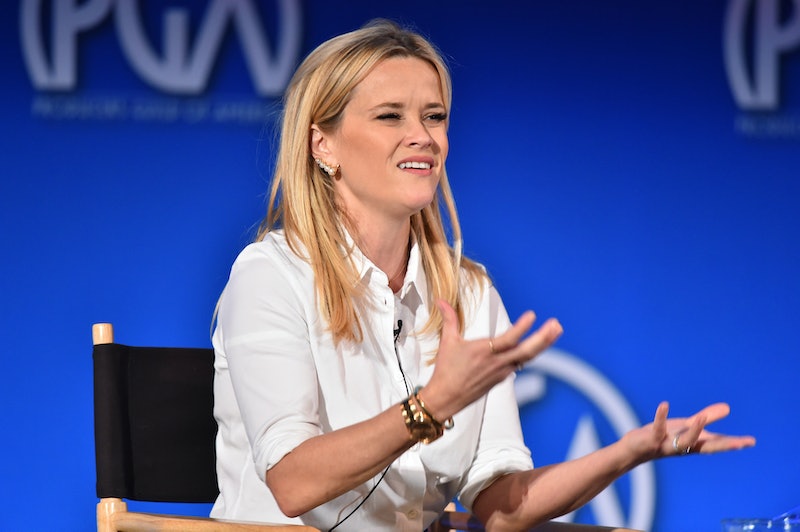 The Emmys are just a mere four days away. While everyone is asking experts about their predictions, other questions should come to mind as well. One important question centers around the all important red carpet. Notably known for failing to ask women questions about their craft rather than just the designer they are wearing in the past, we are all hoping that the Emmys red carpet will continue to make progress. Fingers crossed that the likes of Ryan Seacrest and Kelly Osbourne will fulfill our hopes and #AskHerMore.

The #AskHerMore trend was launched by The Representation Project in February 2014, and has since caught steam with both celebrities and fans alike who have gotten fed up with the large disparity between questions red carpet interviewers ask female celebrities versus the questions they ask male celebrities. Looking back at past red carpets, before Reese Witherspoon renewed interest in the #AskHerMore trend at the Oscars earlier this year, it appears like things have been looking up for the talented women of entertainment at the most esteemed red carpets. While there are still strides to be taken, efforts have been made to give women the credit they deserve by asking them in depth questions about their work.

Gone are the days when red carpet interviewers could get away with staying on the surface by only asking actresses and musicians about their beautiful gowns and custom made designer outfits rather than focusing on their brains. Sure, it's nice to give credit to the talented fashion designers who are responsible for these women's showstopping looks, but most of us watch the red carpet to hear what our favorite actresses and celebrities are up to, not just who they are wearing.

The viewers know what they want to see on the red carpet, and, with Twitter trends like #AskHerMore and the recently launched #SmartGirlsAsk, the need to bring attention to women as people and as performers, not just as mannequins bearing a designer label and a nice manicure, has been vocalized. And things have been slowly, though inconsistently improving. Here are some examples of red carpet interviews from the past, where reporters have shown that they can push the envelope and give women a chance to display what amazing talents they are. These examples give us hope for a brighter red carpet interview future.

Fairly new to the music scene, 20-year-old singer Halsey was polished and well-spoken as she was interviewed by Billboard on the VMAs red carpet this summer. Not once was she asked about her style or choice of outfit, and it was evident that she enjoyed talking about her album and work with the interviewer and letting viewers get a glimpse of her craft.

Billboard seems to have #AskHerMore down pat. At the Grammys earlier this year, an interviewer drilled talented female musician Jhené Aiko on how it felt to be nominated for her first Grammy and what she was most excited about, giving her the chance to talk about a lot more than her dress.

Now this interview could have easily taken a turn for the worse, but Kat Graham and her friend Demi Lovato are clear supporters of the #AskHerMore trend. When the female interviewer unfortunately went off topic and immediately asked Lovato who she was wearing when she stopped to greet her long time friend Graham, the two actresses immediately switched the topic back to what the interviewer should have asked her about: her successful music career. It was refreshing watching these two celebs take control of their interview, and focus on their strengths and work rather than their looks.

What a fun interview! It was nice watching this fellow female interviewer ask questions to gifted actress Scarlett Johansson that went beyond fashion and looks, instead involving questions about the fun projects Johansson was taking on and her future feature films.

#AskHerMore is an important trend that should go from being a request from the masses to just being a normal way of red carpet life. We should not have to plead our case in order for talented women's voices to be heard; it should just be a given. Thankfully, these interviews from the past prove that progress is being made, and I have high hopes of it continuing on the 2015 Emmy Awards red carpet.