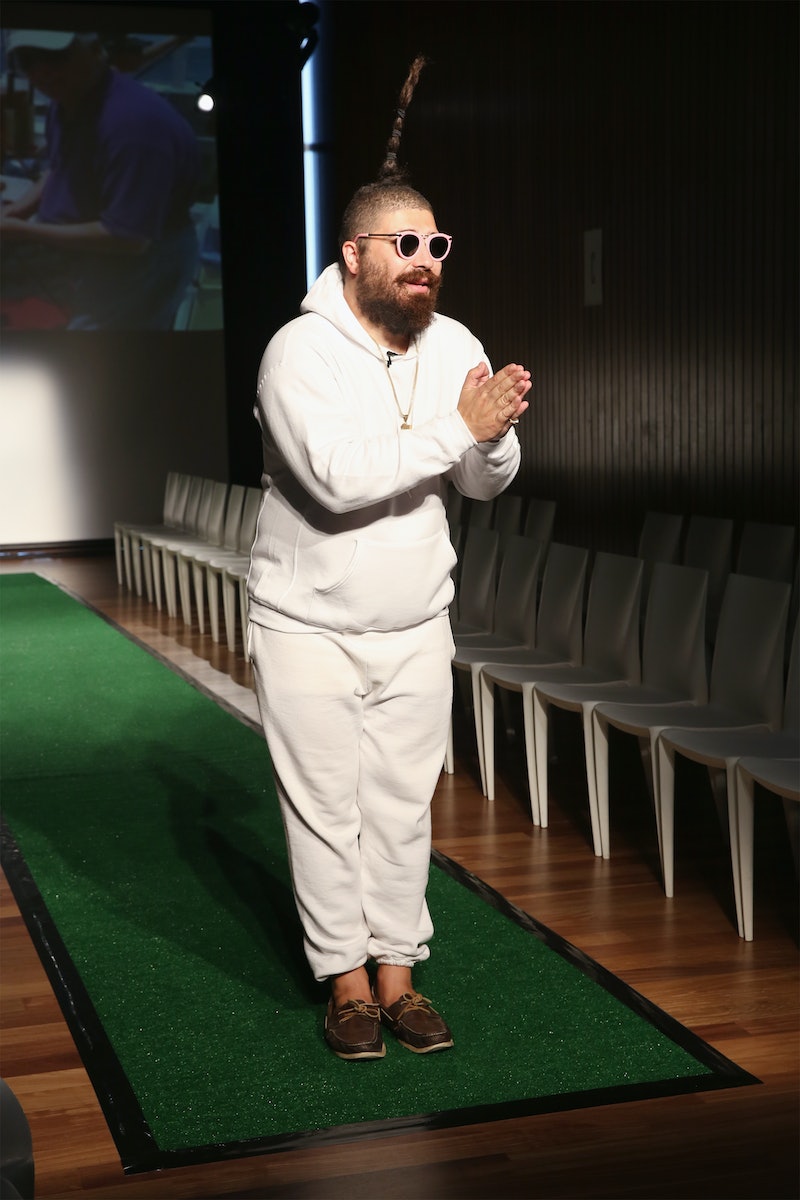 Instafamous personage The Fat Jew is a social media star, an entertainer, a vintner, and yes, a Chosen Person. Now, he's proved he carries weight in the fashion industry, as well, thanks to the The Fat Jewish's Dad-Bod inspired fashion show at NYFW, which he presented as part of MADE Fashion Week at The Standard Hotel in NYC. (Oh, did I mention he's also a Bar Mitzvah DJ, too?)

The collection, which centered on decidedly dad-approved accoutrements like grill accessories, a shapeless turtleneck in maroon, and a 1980's trench coat, was styled by Josh "Fat Jew" Ostrovsky.

Models, who were mostly "discovered" via this boutique agency adorably called Craigslist (ever heard of it?) shuffled awkwardly down a catwalk made of astroturf — designed, no doubt, to mimic fathers' natural habitat.

Home videos of lawn-mowing achievements and grilling highlights played in the background as Bruce Springsteen's greatest were spun by a DJ whose booth was a BBQ.

The show was originally scheduled for an earlier time slot but had to be moved to accommodate Kanye West's surprise presentation. But, if it were up to Ostrovsky, the show would have gone down at a more apropos spot: "The DMV at 2 a.m." he told The New York Times.

In terms of style, "Dad Fashion" is the ultimate normcore statement, and in fact, The Fat Jew is a champion of Basics and White Girls everywhere. He does, after all, co-own White Girl Rose, a blended wine label the website for which asks you to click "YASSS" to enter if you're over 21.

Personally, I literally #CantEven with the on-point dad-ness of it all.

Now, Ostrovsky himself is neither a dad (well, unless you count his dog, the also Instafamous tongue-wagging King Charles named Toast) nor is he particularly fashionable, despite his affinity for Karen Walker sunnies.

But he sure as hell is entertaining, and cheers from the audience, who whooped it up as the show closed, prove that even by simply aggregating a bunch of pre-existing dads and their own personal wardrobes, his distinct brand of humor is a refreshing break from the seriousness of NYFW and adult life in general.

High-fives all around for the Fat Jew. And hey, if the whole author/radio host/entrepreneur/local celebrity thing doesn't work out, a future dressing windows at Gap sure doesn't seem like a bad security net.