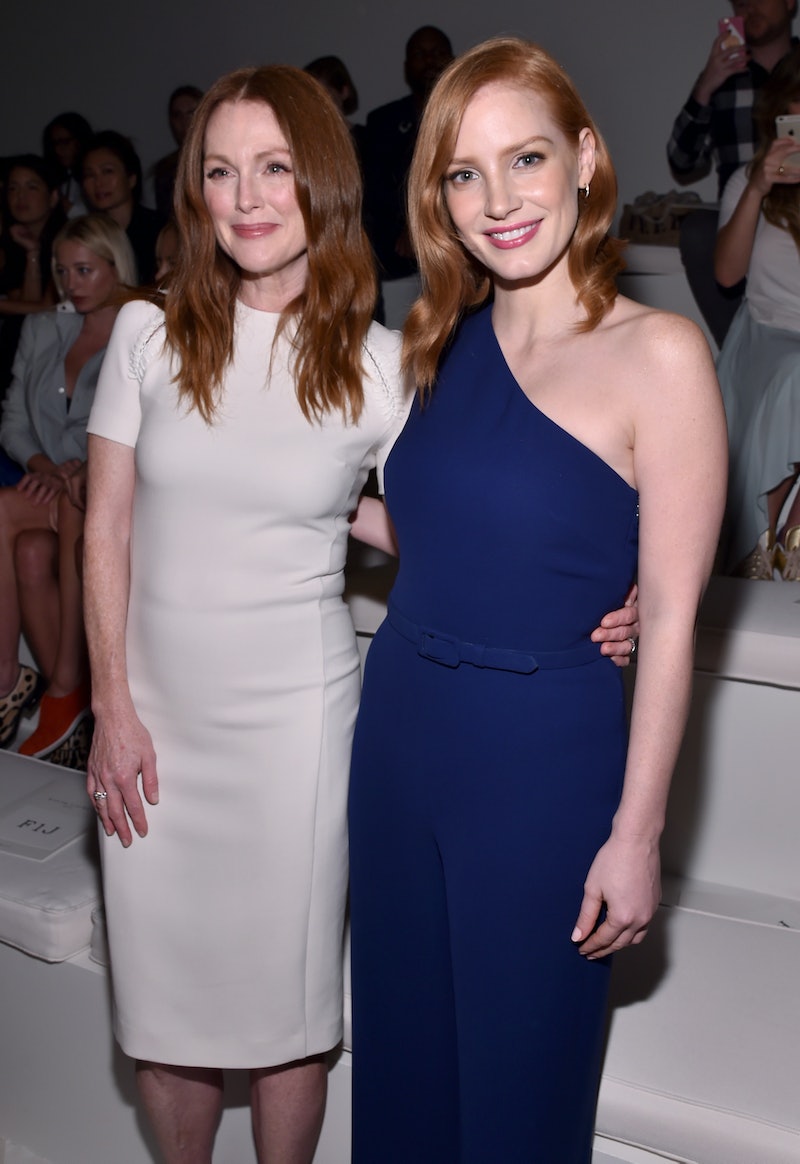 Honestly, does it get any better than Julianne Moore and Jessica Chastain glamming up the front row at Ralph Lauren? I don't think so — after all, each award-winning actress is quite fabulous on her own, but together? Well, it's a veritable explosion of sartorial glory — heck, the two of them look so good together, we might as well make this the official petition for them to always appear side by side for all public appearances. They were also joined by fashion blogger/designer Chiara Ferragni, former Lucky editor-in-chief Eva Chen, Alec Baldwin and his wife, Hilaria Thomas Baldwin — which only sought to up the fashion ante, of course.

Both actresses have quite the history with Ralph Lauren (did you see Chastain's ultra-chic ensemble at the Ralph Lauren's Wimbledon Anniversary Party? How about Moore's menswear-inspired look at a past NYFW show?), and both perfectly emulated the designer's signature laid-back glam. Moore chose a simple (yet well-fitted) bright white sheath dress, which she paired with loose waves and minimal makeup. Chastain went for a slightly more dressed up look with a royal blue one-shouldered jumpsuit (belted delicately at the waist), and she wore her hair in asymmetrical Old Hollywood-esque finger waves.

She topped the look off with a glossy, saturated bright pink lip (which made for the perfect counterpart to the deep blue of her wide-legged jumpsuit). Let's take a look!

Gloriously '70s, with a touch of modern flair added in for good measure. Wide-legged jumpsuits may be notoriously hard to pull off, but Chastain is doing it with aplomb to spare.

Also, is that or is that not the best shade of fuchsia lip gloss you've ever seen?

Man is Moore's accessorizing on point (THOSE SHOES).

Yep, these two ultra-talented ladies should definitely make a habit out of sitting front row together from now on.