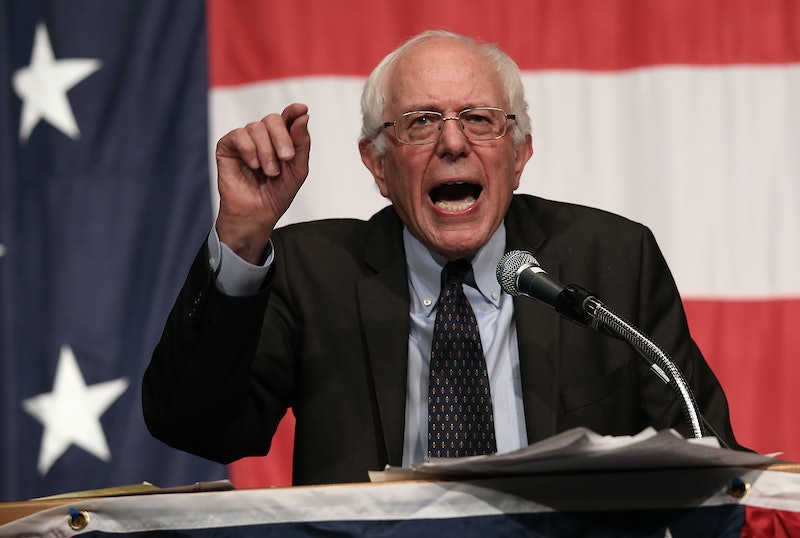 Wednesday night's CNN debate was rife with fervid statements and heated arguments, but even with the energies of all 11 GOP candidates combined, it was utterly stale compared to a Bernie Sanders speech. Sanders has enough passion in his little pinky to solve the energy crisis (if only we could figure out a way to bottle it). There's a reason the man draws crowds so massive that they make Hillary Clinton's — or any other candidate's — campaign stops look like poetry readings. Sanders is utterly captivating and people love not only hearing his electric speeches, but they also love watching his face run the gamut of expressions, his flowing white hair sway, and his hands wave like a conductor during an orchestral crescendo. Even in still photos, it's plain to see that Bernie Sanders is one passionate man.

Whether he's delivering an angry rant about the wealth gap or sincerely supporting the Black Lives Matter movement, Sanders is exhilarating to listen to and watch. His so-called grassroots army has been able to galvanize hundreds of thousands of supporters and campaign crowds five times the size of Clinton's, and it's all fueled by their tireless leader. There's even a set of Berniemojis that celebrate his many expressions.

If you're not familiar with the Independent turned Democrat, and underdog turned real threat, then take a look at these 27 photos of Sanders looking so passionate, you'll feel the Bern through the screen.

He's passionate about us retiring comfortably.

The angrier he gets, the more well-meaning he is.

If he raises his voice, it's out of love.

And if he raises his finger while making a point, then you can really count on him to deliver.

[Thinks about the current minimum wage.]

There's nothing like a good old-fashioned two fingers in the air to get the crowd going.

But sometimes just one finger in the air is also effective.

Can you see the passion in those eyes?

Even when the bright lights beam down, Bernie stays laser-focused.

"Can we please not start a war with Iran, Republicans?"

Next time you want to be assertive, try using the Bernie half-point.

Bernie probably doesn't even need a microphone for his impassioned speeches.

Just imagine the damage he could do with a megaphone.

This needs to be a poster or at least a mouse pad.

When Bernie's fed up with something, like how politicians are in the pockets of billionaires, he throws his hands up.

He just can't even sometimes.

"Health care should be a right, not a privilege."

Even when he quietly emotes, he's still more passionate than most people.

That microphone will never be the same again.

And, of course, Bernie has a happy passionate side too.