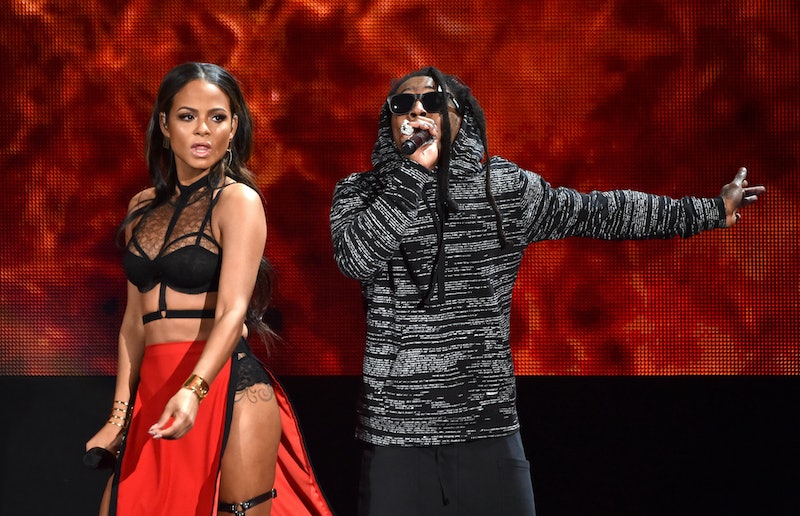 Though former couple Christina Milian and Lil' Wayne very recently called it quits, that apparently doesn't mean they can't still work together. It was shocking to hear about their split, especially due to the very private nature of their relationship — but even more shocking to see them working together after. However, unlike most exes, here they are: Christina Milian and Lil' Wayne released a new song, "Do It," and it's totally a powerful track. But, I have to wonder: is there a hidden meaning to their collaboration in the lyrics?

It's pretty common for artists to write about their experiences in different relationships. Artists like Taylor Swift are known for songs about their past loves, good and bad — so it should come as no surprise that speculation has arisen as a result of Milian's verses with Lil' Wayne in "Do It." Could she be talking about her relationship with the infamous Weezy?

For those of you who do not know much about Christina Milian and Lil' Wayne's very private relationship, let me give you a little backstory: The two started dating after years of knowing each other professionally. In fact, the "Look At Me Now" rapper has played a big role in Milian's music career these past few years, so it's no surprise that the chemistry carried over from the studio into their personal lives. Their relationship didn't end over a big misunderstanding or scandal, though: sources confirmed that the pair split over being too busy to see each other and not having enough time to spend time together.

From the looks of things, it could be very true that Milian was singing this sultry song about her relationship with Wayne. If you listen closely, it becomes clear that the song is about her falling in love with a "bad boy," even though they are not normally her type. Take Milian's sultry lyrics, for instance: "I'mma tell you like this / Baby, I don't usually do this / I'm usually a virtuous woman / We don't even know what we doin' / But I'mma go ahead and do it."

It looks and sounds like this is a classic case of falling for the wrong guy — and continuing to fall for him, even though you know you shouldn't. Milian sings her message loud and clear here, and she might just have given us a clue into her and Lil' Wayne's ended relationship. But what do Weezy's lyrics say?

The rapper sings: "Lord, I don't know what she doin'/ But I know she know what she be doin'/ So with that said, I'mma keep doin'/ Just what the f*ck I be doin'/ I'm grown." Hmm, it seems like the rapper has the same idea. It sounds like he's on the same page as Milian, agreeing with the fact that it looks like she was making a mistake falling for a "bad boy." Implying in the song that he is aware that Milian is making a mistake but is still going through with it, he is going to follow suit and do the same, stating reasons like he is "grown."

After reading into it, this song could very well be about their past relationship. However, whether or not this song lead to another collaboration with the exes remains to be seen.

Listen to "Do It" below: