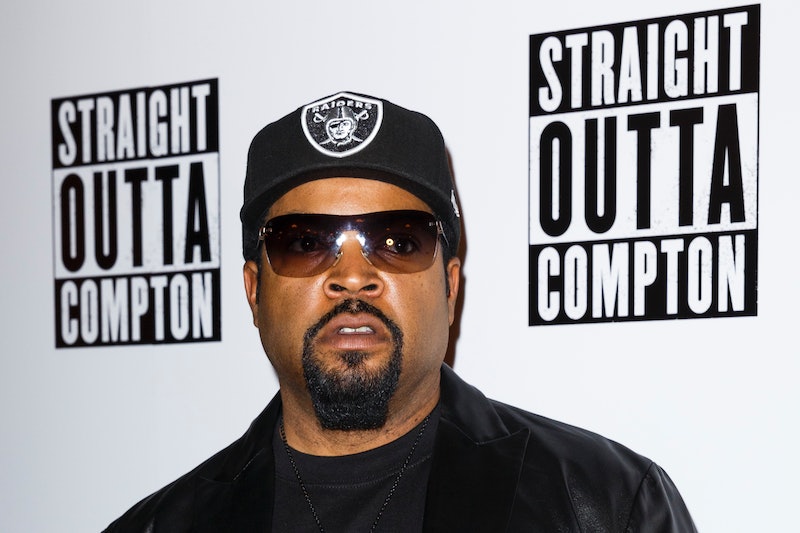 There are certain stories that are so iconic that they are continually reimagined in pop culture. Charles Dickens' novella A Christmas Carol is perhaps one of the most iconic examples of this, and not just because Lifetime seems to have a new modern iteration of the work year after year. As reported by Deadline, a new Christmas Carol film is heading our way, and the person playing Scrooge may surprise you. As Deadline reported on Thursday, rapper-turned-actor Ice Cube will play Scrooge in upcoming film Humbug, so titled after the Dickens' character's infamous catchphrase. Thanks to Ice Cube, who will be playing a real estate mogul who gets a major Christmas lesson from the ghosts of Christmas Past, Present, and Future the common Christmas tale may be rebooted into something even cooler. (Yes. Pun intended.)

Ice Cube will be the latest person to step into the greedy man's shoes, but he's hardly the first actor to take on the role. A Christmas Carol has been imagined in so many ways that it's almost impossible to list all of them, but if you turn on your TV to any cable network in December I guarantee you can check out quite a few variations. And it's not just films that borrow from the tale: plenty of television shows base entire Christmas episodes around Dickens' original story.

So what modern variations of A Christmas Carol might serve as some inspiration for Humbug? Here are a few works the filmmakers may have checked out:

This film follows the plot of the original story, save for one thing: Scrooge is played by a Scottish duck. It's slightly surprising that Disney would place its characters into such a seemingly dark concept (I mean, Scrooge is visited by three very dead ghosts) but at the end of the day, everyone learns the meaning of Christmas. It works out.

The role of a television executive with a vendetta against Christmas is oddly perfect for Bill Murray, who takes on the Scrooge-esque role for this modern adaptation. He puts Ari Gold to shame.

There's a nearly all-Muppet cast for this flick, save for a deliciously loathsome Michael Caine as Scrooge. No word yet on whether Ice Cube's new film will be a musical, but if so, it'll have to compete with the hilarious songs featured in this Muppet adventure.

If you're an animation junkie, this 3D animated feature (starring Jim Carrey as Scrooge!) might have been your everything. The film pulled out all the stops on sweeping views of London and scarily-detailed facial design for its characters. It's a little too good at times (uncanny valley, much?) but the film was definitely a game changer.

Finally, a lady Scrooge! This modern adaptation, starring Vanessa Williams as the Christmas-loathing character, will likely resemble Ice Cube's most closely — just swap out "pop star" for "real estate mogul." Kathy Griffin plays the Ghost of Christmas Past in a role that seems oddly appropriate.

In this episode, Cory and his OTP Topanga celebrate the holidays together for the first time and argue about how to do Christmas right. Luckily, falling asleep to A Christmas Carol causes Cory to have a dream feature Mr. Feeney as the Ghost of Christmas Future, who shows him how terrible his life would be without the love of good gal Topanga. (Think Ice Cube's Scrooge could get his very own love interest?)

This Pretty Little Liars episode is significantly creepier than most adaptations of a Christmas Carol, but you have to admit, Mona's Ghost of Christmas Past is the fiercest looking one out of all of these variations on the character. Let's hope Humbug's ghosts have just as much style.

Get ready to get "Scrooged" over, Ice Cube: you're filling some pretty big shoes with this role.