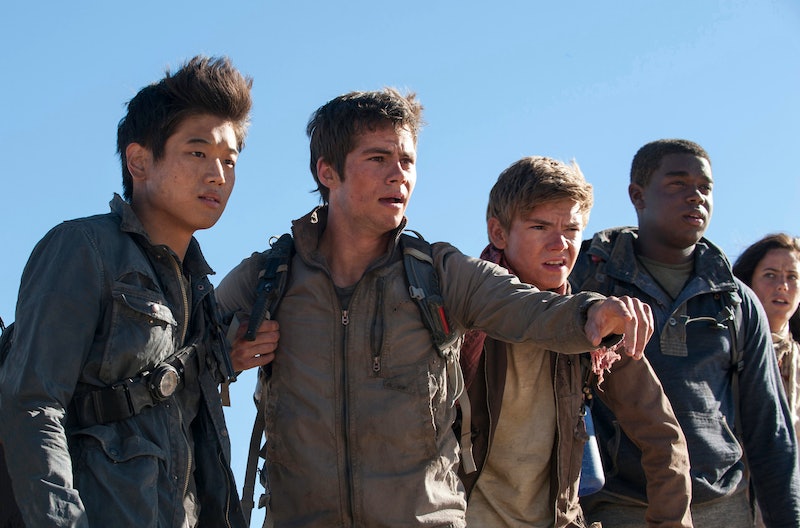 There isn't a maze in The Maze Runner: The Scorch Trials, but there's running. Lots of running. My guess is that the amount of running in the movie and in the book that is was based are one in the same, but in many other ways, the two entities couldn't be less alike. Still, it's a movie based on a book. The movie is always going to be a different creature. That's why people shouldn't be super surprised about how many ways The Scorch Trials is different from the book by James Dashner.

Like Hunger Games and Divergent, the Maze Runner series is cut from the cloth of YA dystopian sci-fi, where young teens deal with their hormonal emotions while trying to survive life-threatening circumstances. What makes Maze Runner stand out is the main character, Thomas (Dylan O'Brien). Unlike Katniss and Tris, he's a boy — but he's just as confused and messed up. His memories have been wiped and he has no idea why he was put in the maze, but in The Scorch Trials, we get some answers.

The sequel follows Thomas and his Gladers as they escape a facility that they thought was safe and into "the scorch," a sandblasted, barren wasteland of danger and creatures called Cranks. As they attempt to find safety with a group called "The Right Arm," they meet some frenemies, run into deadly storms, try to avoid being infected by a disease called "the flare," and all the time, they are trying to slip from the grasp of the people who captured them in the first place: WCKED — but exactly how much of this is actually in the book?

Diehard Maze Runner fans will probably notice some glaring differences from the book, but they follow the same story arc of the novel — for the most part. Here are some major differences that we spotted... and yes, there are spoilers ahead.

The movie starts with Thomas and his buds getting rescued and put into this mysterious facility where they can rehabilitate and get released to a safe haven. Then they find out what they're really doing to the residents and that's when Thomas makes a plan to escape. Thomas, Minho, Teresa, Frypan, Newt, Winston and their new friend Aris all escape into the Scorch unscathed and uninfected with the Flare because they're immuned, obviously. in the book, it's a little different because they do become infected and they pushed out into the Scorch to find their way to a destination that has the cure. I like this story better because it puts a clear goal at the end of the tunnel — like a maze.

As the only female Glader, Teresa (Kaya Scodelario) gets held captive by WCKED and when Thomas rescues her before their big escape, she's having tests being done to her. At the end of the movie, she betrays the entire group and blows their cover. WCKED finds them and destroys The Right Arm's base (which I will get to later). She explains to Thomas that she had to do it and it's for the best. In the book, she betrays Thomas a lot earlier and a little more blatantly before he just completely cuts her off from their telepathic communication (which I will also get to later).

Aris (Jacob Lofland) is a loner who lets Thomas know that they are staying in a facility that is bad news. He quickly befriends the group and becomes a Glader. In the movie, he's a wild card. He kisses Teresa and then they both take Thomas prisoner for WCKED — but it's all part of an "act." None of this is in the book, which is good because all of this two-timing is getting confusing.

In the books, Thomas and his Gladers can communicate with each other through telepathy (like Professor X). The movies did away with this altogether... and it probably was a wise decision. There's so much going on already that they don't need to throw in mind reading.

Sorry to break the news to you, but one of the original Gladers, Winston (Alexander Flores) kills himself after being infected by a Crank. It's quite a sad scene. But in the book, he dies in a storm. His death in the movie is a lot more cinematic.

In the movie, the Gladers meet the Han Solo-esque wheeler and dealer, Jorge (Giancarlo Esposito) who ends up being a great big help from them. In the book, he is a Crank, but doesn't have any of the zombie side-effects.

There Is No Right Arm

The Right Arm is a rebel group that the Gladers are trying to find, but they don't actually have an active part in the books until the third installment, The Death Cure.

When the Gladers first get to the Right Arm, they aren't welcomed — until a woman named Mary (Lily Taylor), a former WCKED worker, vouches for them and knows more about Thomas than he does. She helps them and gets them into the Right Arm, but guess what? She doesn't exist in the book. She was a character created for the movie.

They may have changed a lot from the book, but most of it just adds more excitement — and anyway, at least the Scorch looks really cool.