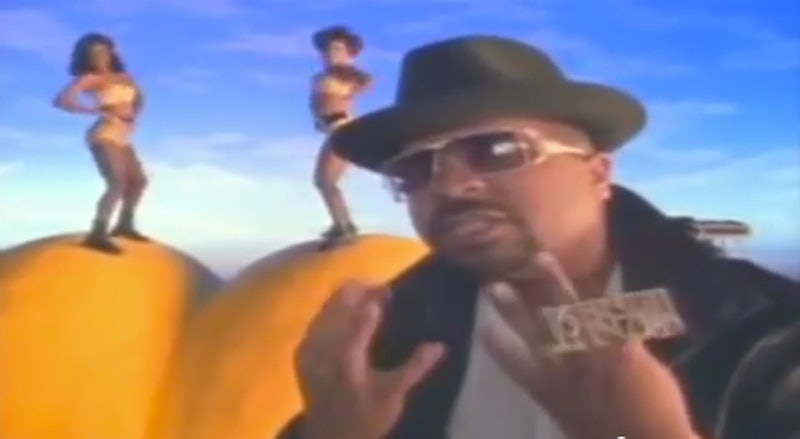 Sir Mix-a-Lot likes big butts, and he cannot lie. His hit song "Baby Got Back", which came out in 1992 and spread like wildfire, praised all of those big-booty ladies out there and told them that their butts — and bodies — were sexy, regardless of what mainstream media had to say about it. Yes, Sir Mix-a-Lot's video is silly (it shows the rapper dancing on top of butt-like objects and features lots and lots of penis metaphors) but it is also a particularly great commentary on what the media typically tells people is a "hot" body (a term almost always reserved for the thinnest of the thin). Vulture recently did an oral history of Sir Mix-a-Lot's famous video, and it made us love this bizarre little rap song even more. In the oral history of his video, Sir Mix-a-Lot talks about the ways in which our culture helped shape his video — and the ways that his video attempts to flip our typical views of women's bodies on its head.

Here are some of the most surprisingly thought-provoking quotes to come out of the man behind the phrase "my Anaconda don't want none unless you've got buns hun".

"There was one event that really made me think that I should do a song about [a different body type], which was irritating the shit out of me. [My girlfriend] and I were at a hotel on tour, when we saw one of the Spuds MacKenzie ads for Budweiser during the Super Bowl. You’d see these girls in the ad: Each one was shaped like a stop sign, with big hair [and] straight up-and-down bird legs. There’s nothing wrong with that, but I was so sick of that shit... I knew for a fact that many artists felt that if they didn’t use a skinny-model-type woman in their video, then mainstream America would reject the song."-Sir Mix-a-Lot (Writer/Producer/Performer)

"You could have the highest cheekbones in the world, but if you were a little more broad at the beam, forget it. The kind of thing that women in my position went through made Mix angry. He’d say “I don’t understand why you can’t get modeling work,” and I’d say “Look behind me.” This was my experience that he was writing about."-Amylia Dorsey-Rivas (Voice Artist)

"When they’re crooning to women about how beautiful they are in an R&B song, the ladies you see in the video don’t reflect what those guys like. Every time an R&B video was on, I heard women say, “I just saw him down in Oakland, and his girls wasn’t like that.” That made me think that this was more than a funny song, and it wrote itself."-Sir Mix-a-Lot

"Pop culture says that if a black girl is to be taken seriously, she has to assimilate and be as white as possible, to the point of bleaching her hair blonde. But the entire point of the song was the opposite."-Sir Mix-a-Lot

"[Sir Mix-a-Lot] was the loudest voice for this cultural overthrow of the Euro-centric beauty aesthetic, in favor of something more akin to what America would like twenty years hence: Black women are now on the covers of magazines, which used to be very risky. “Baby” will forever be a great combination of a silly pop song with an earnest resolve to change the perception of body image in America."-Dan Charnas (VP of A&R)

We're happy that Sir Mix-a-Lot and the other people behind the famous video took the time out to talk about the 1992 video. Sure, there's a lot to laugh at in "Baby Got Back", but a lot of the points that Sir Mix-a-Lot makes about his song are still relevant today. We appreciate any song that celebrates a look and body type not normally admired by the mainstream media. Plus, we love that Sir Mix-a-Lot slams the media for their unrealistic portrayals of women's bodies.

(Plus, Ross, Rachel and Emma really, really dig the song, too)

More like this
Adele’s All-Female Lineup Includes Kacey Musgraves, Mahalia, & Self Esteem
By Shahed Ezaydi
Cardi B’s New Single “Hot Shit” Features Kanye
By Alyssa Lapid
The Stranger Things 4 Soundtrack Spans Classic Eras & Styles
By Brad Witter
You Might Want To Rewatch 'Elvis' For This Britney Spears Easter Egg
By Grace Wehniainen
Get Even More From Bustle — Sign Up For The Newsletter