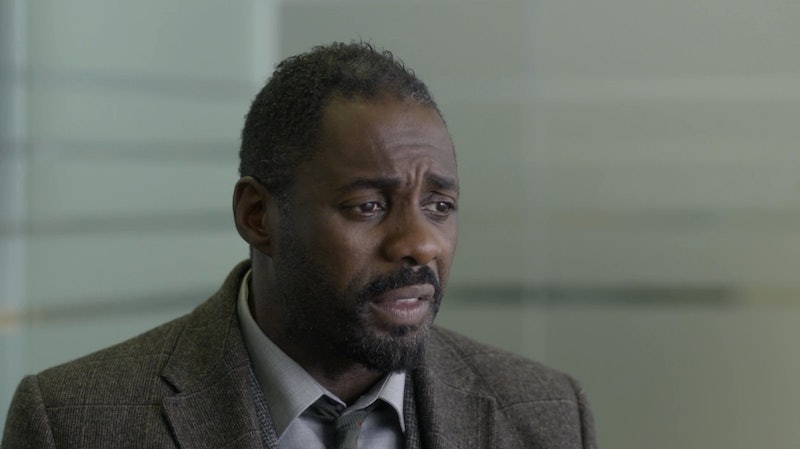 Once in a while, a show comes along that reminds its audience what can be so brilliant about television. Luther is one such show — it combines the “prestige” drama with elements of a classic crime procedural and amazing performances with thrilling story arcs, and it’s gorgeous down to its very production and, of course, casting. Idris Elba stars as the titular character, and he’s the subject of a new Luther teaser image that just came out via the BBC. It shows Elba as John Luther hauling a man bodily out of his apartment, and knowing Luther’s erratic behavior, this man could be either friend or foe, and neither option would be surprising.

Luther first came on the air in 2010 with six hour-long episodes. The second series followed a year later, but the third didn’t air till 2013. Now it looks like the fourth season will finally be coming, if the teaser is any indicator. But Luther, despite its five-year history, has yet to earn a strong following outside of its homeland — it remains a sort of cultish favorite, immediately inspiring devotion among its viewers but not as widely viewed as other BBC offerings. So in preparation for the upcoming season, which promises to be a doozy, here’s a rundown of all the reasons that Luther is amazing.

Well, yeah. Who needs 007 when you have DCI John Luther? Elba has been nominated for a Golden Globe for Luther each season, winning the award for the second season, as if you needed the critical affirmation to switch your browser to Netflix right now. (Now.)

Played by the gorgeous and talented Ruth Wilson, Alice Morgan is a sociopathic serial murderer who does away with her family — and her family dog — early in the series. (This happens in the first episode. It’s not a spoiler.) She’s a foil for Luther, appealing to his inner demons and representing his darkest impulses. Female serial killers are rare in the real world, and perhaps even rarer in television. Somehow, Alice skirts the borders of the “unlikable woman” trope that has been dismissed by pop culture. She’s not wholly sympathetic, yet somehow we want her to come back time and time again. (Her three-episode absence in season three was totally unacceptable.) Oh, and there's a whole lot of sexual tension with Luther.

If you’re anything like me, when you listen to a particular accent for a bit too long, you start adopting some of its inflections. So after a bit of time watching Luther (and believe you me, you won’t stop with just one), you might find yourself squishing your ‘r’s into ‘w’s and adding ‘r’s at the end of words where they don’t entirely belong. This is not a bad thing. It means that you’re engaged with the show, right? In all seriousness, the way the characters’ speech patterns immerse you in the London underground crime scene is truly incredible.

It’s not just how the characters are saying their lines — it’s also what they’re saying. In the first episode, Luther has an exchange with his estranged wife where he entreats her to come home: “Not everything has a motive; sometimes things just happen,” she says when he asks her what happened to their relationship.

He replies, “That's not true; everything has a reason. There are physical laws. I mean, how did we — how did we get here? One minute, I'm one place, and the next minute, I'm 15,000 miles away and I know that I've traveled because I'm dizzy and I just want to throw up. I just can't remember the bits in between.”

The dialogue is delicate, concise, efficient — any number of flattering adjectives you can think of, they probably apply. Luther himself tends not to be the most verbose, but he makes it count.

One of the most appealing elements of Hugh Laurie’s House was its Massive Attack theme song, an excerpt from the introduction to “Teardrop.” Luther, too, takes one of the trip hop group’s tracks — the stunning “Paradise Circus” — to soundtrack its opening credits.

6. The Rest Of The Soundtrack

There’s a scene set to Sia’s “Breathe Me” that will truly break your heart, and rivals the Six Feet Under series finale in most pathos-laden use of that track. Marilyn Manson, Van Morrison, Die Antwoord, and Radiohead also make appearances. Don’t pause before the end credits roll — they feature excellent songs that are as much a part of the episode as any of the action.

Luther tends to look at its characters from unexpected angles, or hone in on them from the least obvious source. The establishing shots for each scene take advantage of urban grime and the London landscapes, and it exaggerates the conventions of cinematography by either focusing on very wide angle shots or looking at the characters’ faces from a claustrophobic closeness. In the first episode, Alice Morgan’s face is seen refracted in a window, lit only by the glare from her computer screen. The expression in her eyes still comes through, and her thrill at the hunt (she’s searching for Luther and his wife) can be easily interpreted.

This one is to be expected when you've got a sociopath and a detective who dances on the end of vigilantism on the same team, but Luther and Alice make a pretty twisted pair.

There are a seemingly infinite number of reasons to watch Luther, and this list is just the beginning. The whole series so far totals just under 14 hours for 14 episodes. If you’re in the enviable position of watching for the first time, it’s no great feat to watch the whole thing in a weekend (or a day, I don’t know your style), and between the personal drama, the morbidly fascinating murders, and the Sherlock-style constantly escalating conspiracies, the time races by.