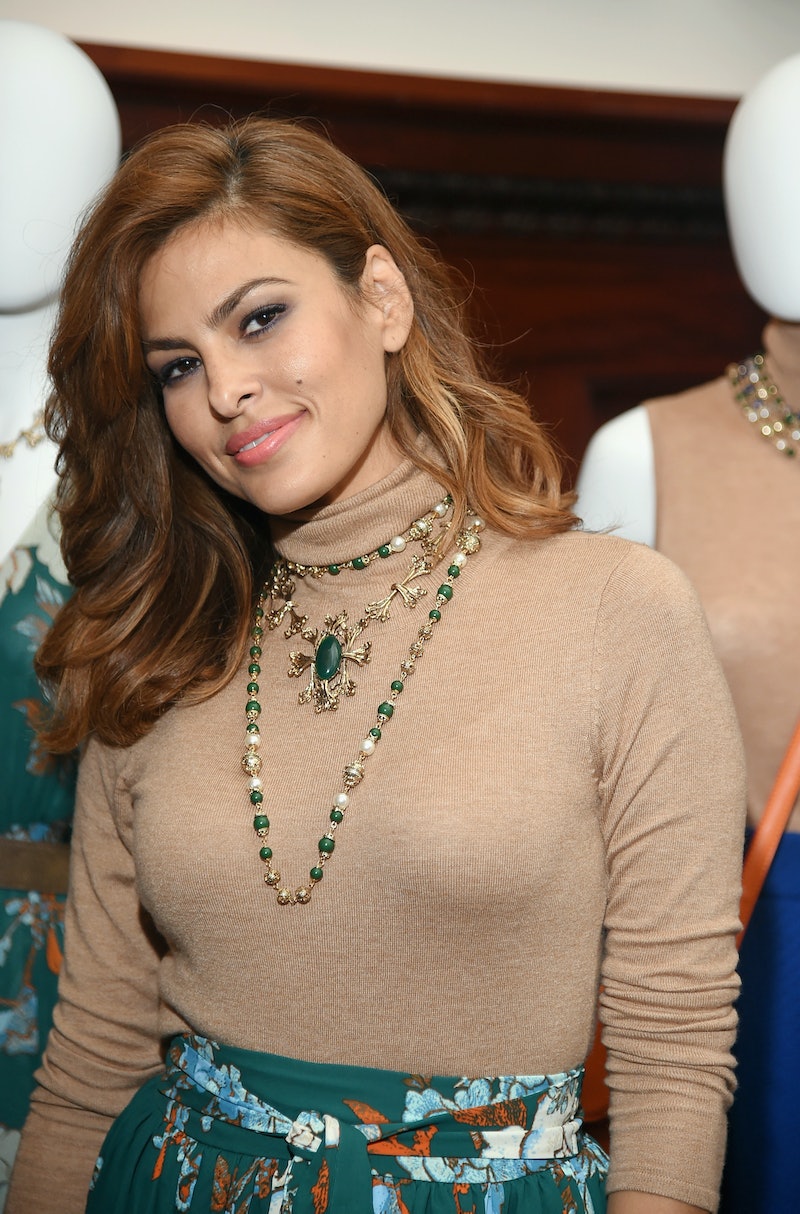 Eva Mendes is most well known for being one for the sexiest actresses in Hollywood. There's also that thing about her being in a relationship with Ryan Gosling. No big deal, right? Actually, it kind of is because the pair's daughter is inspiring the actress. Eva Mendes's mom style centers on being a good example for little Esmerelda, but that doesn't mean she's giving us sexiness.

She's been designing for New York and Company for some time now, and I'm so glad that her sexy, cool style could be incorporated for the brand probably most well known for their conservative fashion. Mendes told E! that there's a sexy quality to embracing being a mother, and personally, I love that while motherhood has influenced the stylish star's fashion, it hasn't drastically changed it.

Mendes was in New York launching her new Fall 2015 New York and Company collection when she sat down for an interview with E!. During the talk, Mendes spoke about how she engages with her customers. She spoke about one encounter saying, "I had a back and forth with one of my customers. They were talking about how they love their mom and they love our stuff because its also beautiful outside of work but its appropriate for work and we got into a nice little chat." I love how she truly seems to embrace their opinions and channel them into her designs with the brand.

Mendes told E! that it was her conversations with customers that inspired her embrace of motherhood in style. In fact, she went into detail about how her daughter has had an impact on her fashion, citing that she's now an example for someone who is looking up to her. She explains, "I think that being a mom now myself, I love dressing…not so much like a mom but there is a sexiness in kind of giving into the mom thing and that I'm dressing as an example for a little girl. Like, I'm someone's example!"

Mendes is definitely big on family. In an interview with Glam Belleza Latina , the actress, businesswoman, and designer says that her family truly helps her take care of Esmerelda. She says, "I really appreciate my family, now more than ever. I’m so happy that my little girl gets to grow up with this.”

It's clear that this mother of one is the perfect role model for her daughter. Whether it's her killer style, business sense, kind heart when connecting with customers, or insane talent, Mendes has a multitude of attributes. I'm pretty sure she'll be passing all of those things down to daughter Esmerelda. Check out the rest of Mendes's interview with E! below!