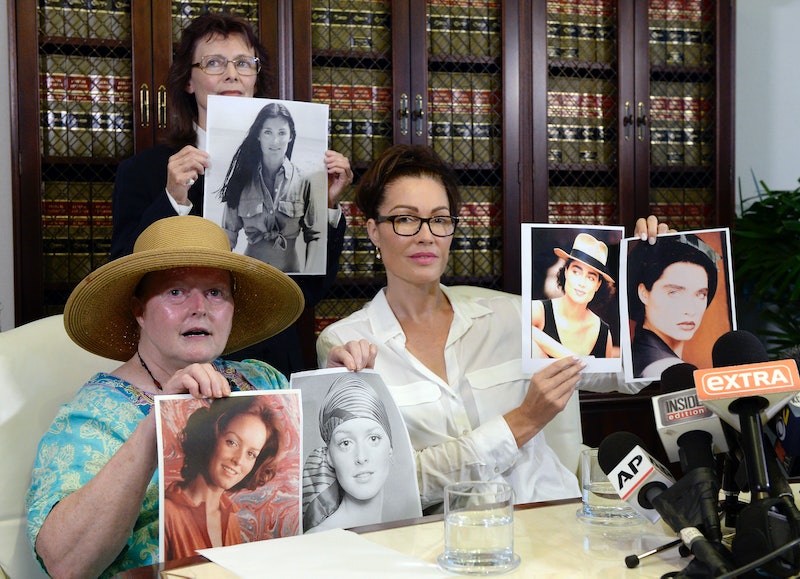 On A&E's new documentary Cosby: The Women Speak, a handful of the more than 50 Bill Cosby accusers spoke out, providing audiences with shocking details of some of the beloved family TV man's alleged assaults. The most striking aspect of the documentary was the similarity between the alleged victims' stories, but one of the saddest aspects with the similarity in their language. One by one, women came forward to retell what may have been the worst experience of their life, and the majority of them ended their testimony with a similar sentiment: "Who would believe me?"

The documentary, which aired on Thursday followed Cosby's career, interspersed with stories of women claiming he had sexually assaulted them. But while the documentary also focused on providing the women with a platform, it also tackled the question of why it took so long for these stories to make headlines. The answer? Because no one would believe them.

"When I went to a lawyer in [1989], he laughed me out of the office," said Barbara Bowman, one of the accusers who was allegedly assaulted by Cosby when she was 17. "Who's going to believe me?" Bowman asked. "He's Dr. Huxtable, America's favorite dad." The other women shared similar sentiments, highlighting the pervasiveness of rape culture and the reticence of victims to come forward. "If there's any question why people don't report rape, it's because it's so damn humiliating," Victoria Valentino, a former Playboy playmate, said. "You don't want to talk about it again."

Even as the women recounted their stories, they grappled with the worry that they wouldn't be believed. "If you don't remember what happened, how can you say molested or raped?" one accuser wondered. The language used by the women is a perfect example of the perpetuation of rape culture, and how easy it is to slide into victim blaming rhetoric — even when talking about one's self. Some accusers, like Charlotte Fox, wouldn't even say the word "rape" or "assault." “He had sex with me," Fox said. "I was not a participant, and it was not consensual.”

As unsettling as the details of the alleged crimes were, one of the most disturbing aspects of the program was the repetition of this type of language and the question of how the accusers could ever be believed. "Who's going to believe me?" asked Chelan Lasha, who was 17 when Cosby allegedly assaulted her. "I'm just a high school student."

At one point in the segment, model Beverly Johnson recounted how she told her daughter that she was going to go forward with her story. "I told her that I'm coming out with my story," Johnson said. "And she said, 'No, don't Mom. Do you want that to be your legacy?'"

But the documentary also made a compelling point — many of these women either weren't believed, or were scared of coming forward. The pervasiveness of rape culture, combined with Cosby's celebrity, made them positive that no one would listen. It wasn't until comedian Hannibal Buress joked about Cosby being a rapist that suddenly the world listened. As the accusers pointed out, their statements were ignored, until a man came and validated them.

Cosby and his legal team deny the allegations, and he has not been formally charged with anything (largely because the statutes of limitation have run out on most of the alleged crimes). But the number of women coming forward continues to grow, as media attention on the accusers increases. A&E's documentary was, in part, a continuation of New York Magazine's profile of the Cosby accusers that was released earlier this summer. Whether their stories are true has yet to be proven — but the pervasiveness and victim blaming that surrounds rape culture and prevents victims from coming forward is undeniable.