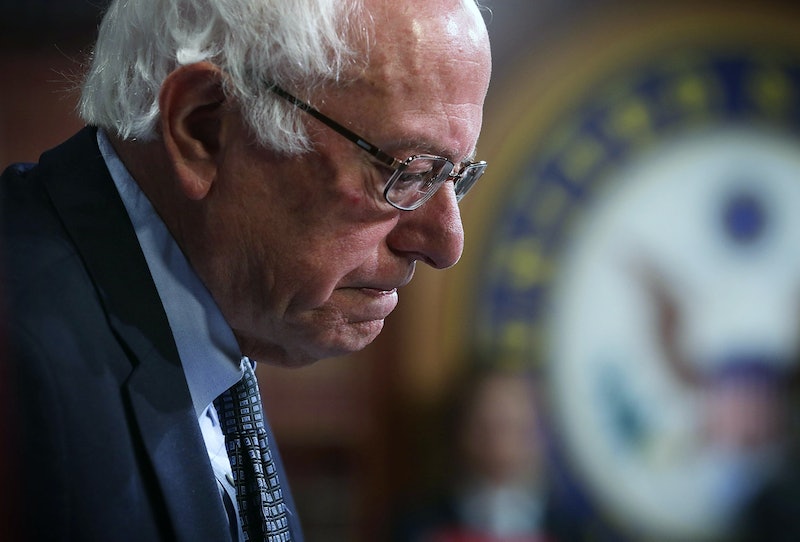 Vermont Sen. Bernie Sanders is a longtime advocate of prison reform, but the plan he unveiled Thursday takes that passion to the next level. The Justice Is Not For Sale Act, a bill that's being co-sponsored by Reps. Raul M. Grijalva (D-Ariz.), Keith Ellison (D-Minn.), and Bobby L. Rush (D-Ill.), would ban the federal government from creating contracts with private prisons. Setting him apart from other presidential hopefuls in yet another way, Bernie Sanders' stance on private prisons not only shows he's taking a stronger position on prison reform than the other candidates, but also how his campaign focuses on issues rather than attacks other candidates.

At a press conference Thursday, Sanders said that the U.S. criminal justice system "is broken and in need of major reforms." Sanders added that "study after study after study has shown private prisons are not cheaper, they are not safer, and they do not provide better outcomes for either the prisoners or the state." Sanders plans for the stipulations to go into effect within two years of the bill's enactment, and the bill would end private ownership of jails and prisons. If this bill is enacted, state and local governments would oversee local jails and prisons rather than companies such as the Corrections Corporation of America and the GEO Group, two of America's biggest prison corporations.

"In my view, corporations should not be allowed to make a profit by building more jails and keeping more Americans behind bars," stated Sanders.

In addition to eliminating private prisons, Sanders' bill proposes that the government reinstate the federal parole system and its guidelines allowing qualifying prisoners to be released before completing their sentences. The bill would also remove a requirement that Immigration and Customs Enforcement hold at least 34,000 prisoners each day. Such a quota, Sanders argues, would create incentives to put people in prison for lesser crimes. Earlier this week, Sanders told The Washington Post that private prisons have a "perverse incentive" to incarcerate more Americans to make a profit. According to a 2013 report from the Bureau of Justice Statistics, about 8 percent of U.S. prisoners were held in private facilities that year.

For Sanders, effective prison reform goes hand in hand with racial justice, another category in which he's excelled above his 2016 competitors. Sanders noted in his speech Thursday that black Americans are incarcerated nearly six times as often as white Americans, a figure he called "unacceptable." Sanders also met with activists from Black Lives Matter on Wednesday.

It's certainly a refreshing change from the rampant ad hominem attacks in Wednesday's debate among GOP presidential hopefuls. Even Democratic presidential hopeful Hillary Clinton, who has also spoken out about prison reform, hasn't proposed a plan as concrete as Thursday's bill. While Bernie Sanders' campaign posted a witty Facebook post after the GOP debate — the post called the event "really pretty sad" in the grand scheme of issues facing the United States — Thursday's proposal proves Sanders can walk the walk and talk the talk. Let's hope that Sanders' passion about prison reform will inspire other 2016 candidates to promote real change, too.