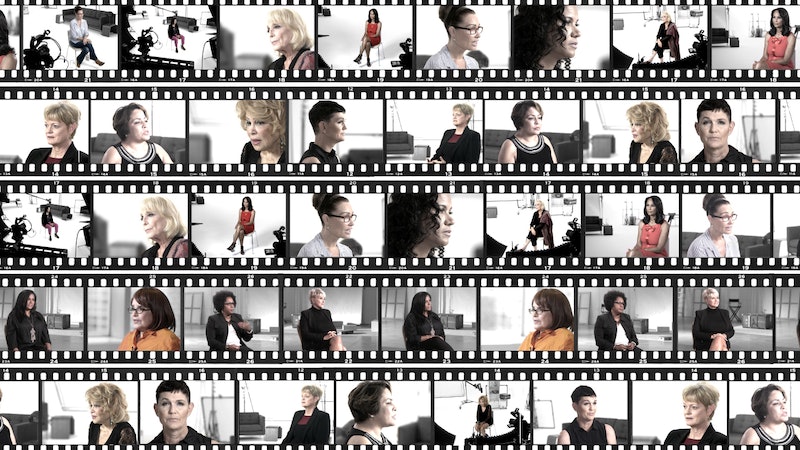 In a wrenching one-hour special, more than a dozen women sat down with A&E and recounted the allegations we've all become too familiar with: an offer of career advice, a drugged drink, and foggy memories of a sexual assault that, at times, felt unreal. As of August, more than 50 women have stepped forward and levied allegations of sexual assault and rape against longtime family TV superstar Bill Cosby. You saw New York Magazine 's stunning Cosby story, which collected 35 of the alleged victims' accounts, but putting voices and faces to these claims, one right after the other, was an entirely different experience. While the A&E's special provided a platform for these accusers, one big takeaway is how much weight the men in Cosby: The Women Speak still had on the sexual assault narrative.

Yes, the women spoke. Supermodel Beverly Johnson claims instantly knowing she was drugged after taking a sip of a cappuccino at Cosby's insistence. Former Playboy playmate Victoria Valentino said she felt humiliated after her alleged assault, a graphic account that claims she was forced into performing oral sex and was raped "doggy style."

Other than archived footage of the comedian, who did not provide an interview to A&E, there were just two instances when a male voice entered the storyline, but both times they served as tools to legitimize the women's claims, as if to say, "If you don't believe them, there's this guy who will back them up."

In July, Cosby Show co-star Joseph Phillips penned a personal blog post titled "Of Course Bill Cosby Is Guilty!" in which said he believed the allegations after a close friend, who has not come forward publicly, confided in him that she had the same experience with the comedian as the other women. In the post, Phillips asked Cosby to recuse himself from the public spotlight to "preserve just a bit of our enchantment" of his legacy. In his A&E sit-down, Phillips remembered his friend asked him a question, the same four-word question facing all of Cosby's accusers.

That simple question is so poignant because it forces you to ask yourself, "What would it take for you to believe these women's accusations?" Usually it's tangible evidence like DNA or video footage. Other times, like with Phillips, it's your history with somebody that convinces you of the truth. In many cases, a person with no dog in the fight will be the unbiased witness that provides authority. But with the controversy surrounding Cosby, it seems as if that voice needs to be male. If Phillips was a female co-star speaking up, I have a feeling she would have been lumped in with the rest of Cosby's alleged victims. In this case, one woman's claims, let alone 50, are clearly not enough.

The second man heard in the documentary comes from a recorded comedy set by comedian Hannibal Burress. It was Burress' joke that flat out referred to Cosby as a "rapist" that initiated the wave of recent accusations, starting with Barbara Bowman's Washington Post story "Bill Cosby Raped Me. Why Did It Take 30 Years For People To Believe Me?" The subheading for that article, by the way, was "only when a male comedian called Cosby a rapist did the accusation take hold."

And that's exactly what happened. "This guy is a man," Valentino says in the documentary. "A man is making a joke about it in his stand-up routine? And suddenly everybody believes him." Actress Eden Tirl adds, "There were many, many women who had come forward about it before this stand-up routine, so I think that's bullshit."

With allegations going back as far as the 1970s, why are people believing them now? And why are others still not? A quick look at the tweets trending under the show's hashtag #CosbyWomenSpeak shows opinions on the comedian are heavily divided, and sometimes at a gross magnitude.

As much as the documentary was about the women, the hour was still very much Cosby. A timeline of the comedian's lucrative career begot each harrowing accusation of sexual assault. You never did quite forget that in the center of all the controversy is still Cosby the family man. Even now, with Cosby set to be deposed in California on Oct. 9 in a civil suit, the focus is on what he will say and how that will transform his legacy.

Regardless of whether the allegations are true, everyone deserves the courtesy of having their voice valued, and these women shouldn't need a man's presence to make their stories worth listening to. Even if these women hadn't publicly identified Cosby, they still should have been heard. So, were you listening? And when the time comes for you to speak up and share your thoughts, what will you say?