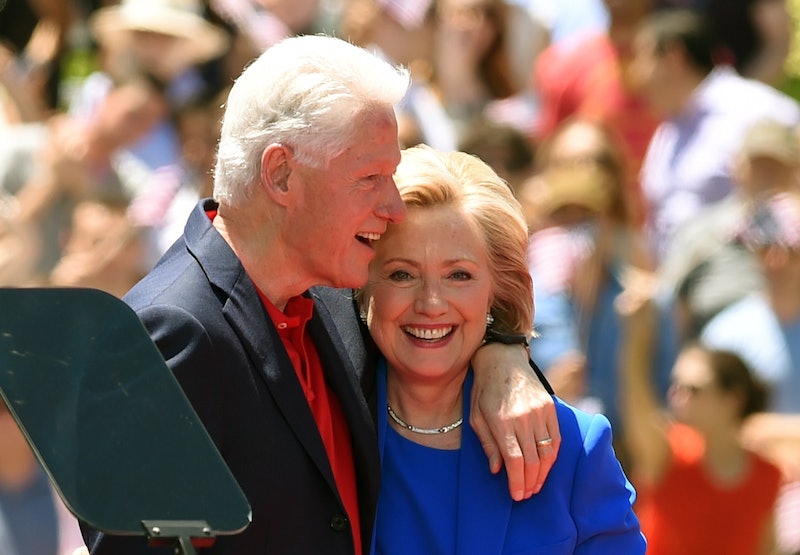 There has never been a political power couple quite like the Clintons. Let's not forget Bill was our 42nd president, and returning from a four-year break after serving as President Obama's secretary of state, Hillary Clinton is running for the White House the second time. Given their extensive experience in politics, I've definitely thought about whether Bill could serve as Hillary's vice president if she was elected next year. And the truth is, so has Hillary.

As part of her recent media whirlwind tour (a conscious effort to make the notoriously guarded candidate more accessible), the Democratic front-runner sat down with Extra's Mario Lopez Monday and fielded the obvious questions about Donald Trump and Bernie Sanders. But the highlight for me was when the conversation went a fun direction with the prospect of a Clinton-Clinton ticket should she win her party's nomination. Hillary joked it "crossed her mind" but that she was told it wasn't constitutionally possible. As she explained it,

He would be good, but he's not eligible, under the Constitution. He has served his two terms, and I think the argument would be as vice president it would not be possible for him to ever succeed to the position — at least that's what I've been told.

It's no secret that Bill did more harm than good during Hillary's first presidential run back in 2008, which is why he's been largely absent from public view these past several months. Rest assured, he hasn't just been sitting idly by — most likely quietly lobbying on her behalf with donors and insiders — and he'll come out in full force if she wins the Democratic Party's nomination. Bill might not be her vice president, but he'll definitely be a big part of her administration whether serving in an official role or simply staying behind the curtain as an advisor.

I'm getting ahead of myself. Still, even though that's still a ways to go (we haven't even had our first Democratic debate!), it's still fun to imagine the idea of a husband-wife duo running things in the White House. It just makes me think back to what kind of late-night plotting must have gone down while both were ambitious law students at Yale. The Clintons are as close to Frank and Claire in real life as you're going to get, and I, for one, despite all the controversies and legitimate misgivings about the pair, am obsessed.