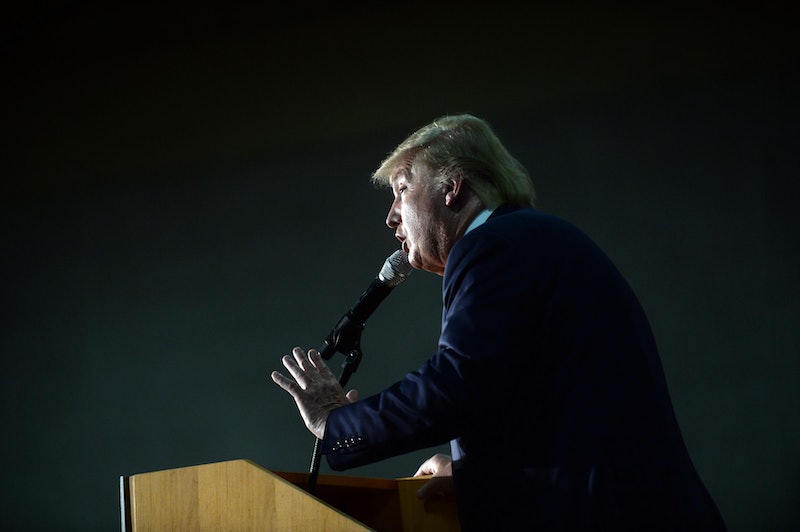 After the second GOP debate on Wednesday evening, some are beginning to speculate that Donald Trump's meteoric rise in the polls may start to plateau, and then quickly reverse. It's apparent that so far Trump's incendiary antics and love for hyperbole have resonated well with a large portion of the conservative voting base, but at this point, Trump's campaign just looks like satire to any critical viewer. We've all wondered whether or not what has been making Trump popular will lead to his demise; can yelling and cracking wise really get someone all the way to the White House? Now that Trump is demonstrating that he's an un-ironic caricature of himself, it seems likely that he's going to stop himself in his own tracks with his own fiery rhetoric.

What makes this whole spectacle less funny and more depressing is the fact that Trump genuinely finds it humorous without seeming to understand the satirical narrative that has been happening around him for years. The idea that President Obama is secretly a Muslim, for example, is one that Trump latched on to several years ago, and is one that has been debunked, parodied, and satirized for as long as the rumors have been out there.

On Thursday, Trump obliviously played into this now-passé "Obama is a Muslim" trope by not only failing to correct, but also genuinely laughing about, an audience member who stated that the President is not only a Muslim, but is also not an American. Trump has been fixated on both of these ideas, despite the fact that most of the rest of us see it as little other than a barely-funny joke.

Trump's campaign now seems to be (unknowingly) imitating art, in a sad way that that only Trump and his supporters still find genuinely humorous. Here are some Trump moments from and leading up to his presidential campaign that seem like intentional satire, but unfortunately are serious remarks.

"Maybe it says he's a Muslim."

Let's start back in 2011 when Trump became obsessed with the thoroughly debunked theory that President Obama was not born in the U.S., and therefore that his presidency was illegitimate. He told Bill O'Reilly on "The O'Reilly Factor" in a 2011 interview:

This was after Hawaii had produced Obama's birth certificate, and after it was confirmed that his birth was announced in two Honolulu papers the week he was born. When Trump still hadn't dropped it a year later in a 2012 interview with CNN, Wolf Blitzer told Trump he was "starting to sound a little ridiculous."

"My apartments, my ties, they love me!"

Moving ahead to 2014, Trump gave a speech at the annual CPAC where he was touting a lot of the same slogans we've heard throughout his campaign, including his presidential tagline "Make America Great Again." It's not at all unreasonable to think that he was already campaigning at this point.

In his CPAC 2014 speech, Trump spoke for several minutes about how much he likes China, and how much Chinese people love him and "Trump anything" including apartments and ties. He then immediately segued to saying that Obamacare needs to change. Then after one or two sentences said (yelled): "We either have borders or we don't!" The lack of logic and flow behind his speech as it slowly devolved into a disorganized rant is a joke in and of itself.

"That God Ever Created"

Now we get to the official commencement of the Trump campaign in June. During a speech that ran almost an hour, Trump stated, "I will be the greatest jobs president that God ever created," Trump said in his presidential campaign announcement speech. Trump has always spoken in highly hyperbolic terms and doesn't ever shy away from an over-use of superlatives. His entire announcement was saturated with over-the-top language that made lade night comedians drool.

After announcing his presidential campaign, Trump gave a speech in which he gave out Lindsey Graham's personal cell phone number to the audience, and therefore anyone in the world who has open access to the Internet. When I watched the video of this speech, Saturday Night Live was the first thing that came to my mind.

Bringing us right up to the present moment, Trump's performance in the second GOP debate this week was as loud as ever, but he floundered much more under tough responses and charges from his fellow candidates. Doing absolutely nothing to show that he has any sense of self-awareness or takes seriously the genuine concerns over his bombastic demeanor, all Trump had to say about his ludicrous behavior was: "And believe me my temperament is very good, very calm."