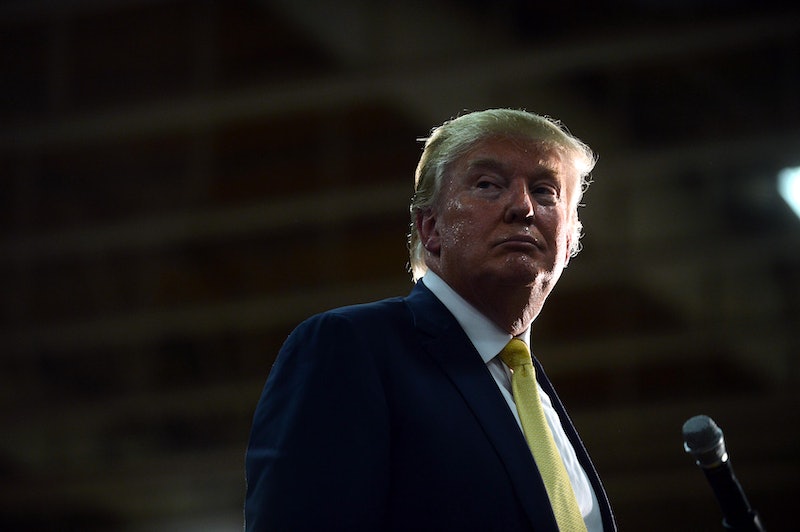 Business mogul Donald Trump is still considered the GOP presidential front-runner, which makes his latest blunder even scarier. At a campaign event in in Rochester, N.H., on Thursday, a Trump supporter posed a blatantly anti-Muslim question to the businessman, and what should have been a teachable moment for Trump became a major setback. Trump didn't challenge the anti-Muslim question, and his response even seemed like he was enabling the supporter who asked it. This is not a good look, Donald.

According to CNN, the Trump supporter stood up at the town hall and asked the businessman-turned-politician:

We have a problem in this country. It's called Muslims. You know our current president is one. You know he's not even an American. Birth certificate, man. ... Anyway, we have training camps growing where they want to kill us. That's my question: When can we get rid of them?

Instead of pointing out that President Obama is neither a Muslim nor foreign citizen, and addressing the fact that it would be unconstitutional — among other things — for the federal government can't "get rid" of American citizens who are Muslim, Trump rolled with it. The GOP front-runner responded:

Following the town hall event, Trump wouldn't elaborate on his comment or why he didn't correct the supporter who posed the question. The GOP front-runner has also been uncharacteristically quiet on Twitter since Thursday night's event.

As Trump remained quiet, many of his challengers — Republican and Democratic alike — pounced on this opportunity to attack the flamboyant front-runner. Democratic presidential candidate Hillary Clinton tweeted on Thursday that Trump's apparent apathy when it comes to harmful myths about Muslim-Americans was "disturbing."

Appearing on Today Friday morning, New Jersey Gov. Chris Christie said he's not going to "lecture" Trump, but he had some wise words for the Donald. "If someone at one of my town hall meetings said something like that, I would correct him," Christie said. "I'd say that the president's a Christian and he was born in this country. Those two things are self-evident."

Christie would not say whether or not Trump has an obligation to apologize to Obama and Muslim-Americans. But the New Jersey governor did take a jab at Trump, saying he needs to decide "how serious of a candidate he wants to be."

The media wants to make this issue about Obama. The bigger issue is that Obama is waging war against Christians in this country. Their religious liberty is at stake.

The campaign manager added to The Washington Post that the question was specifically about these "training camps," purportedly operated in America. Of course, there is no evidence that these training camps exist.