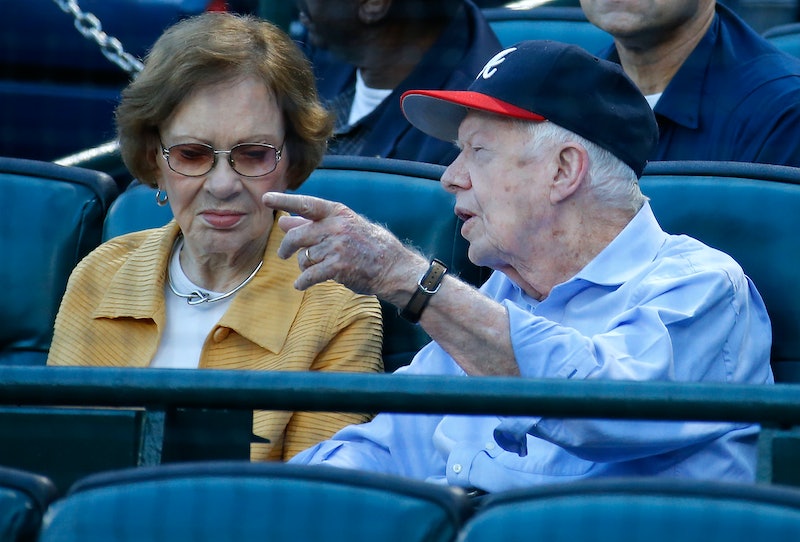 Will the world ever see another love like Jimmy and Rosalynn Carter's? I ask you. The former president and first lady, married a staggering 69 years, caught an Atlanta Braves game at Atlanta's Turner Field on Thursday, and shared a tear-jerkingly adorable kiss when Jimmy and Rosalynn were caught on the kiss cam. Jimmy, president for a term between 1977 and 1981, announced this summer that cancer has spread to his brain, saying in a press conference at the time, "I've had a wonderful life, so I'm surprisingly at ease." When asked about any regrets, Jimmy replied, "The best thing I did was marry Rosa." Are you crying yet? I'm not even done.

Jimmy, generally regarded as a lukewarm president and wildly successful humanitarian, has spent the years since his presidency working alongside Rosalynn to advance human rights around the world. Rosalynn herself is a powerhouse, having spent decades fighting to break down mental health taboos — and this was back in the 70s and 80s, remember, when mental health was a more difficult subject to raise than it is now — and traveling extensively with her husband in the pursuit of human rights and democracy as the two entered their 80s. (Carter is 90 now and Rosalynn 88.)

"She's been a full and precious and vital partner with me in everything I've done," Carter told HuffPost Live in July.

If that wasn't too much for you, here's the whole video.

And if that doesn't have you crying all over your keyboard, wondering if you'll ever know a love like that, George H. W. Bush and Barbara Bush were also caught on the kiss cam last winter.

Oh, and back in the 1940s, a 17-year-old Jimmy turned to his mother and said, "She's the girl I want to marry" of Rosalynn. Also, they say "ILYTG" to each other — an acronym for "I love you the goodest." That's it. I can't. I'm done. If you need me, you can find me watching The Notebook on repeat and wondering if it was inspired by Jimmy and Rosalynn all along.