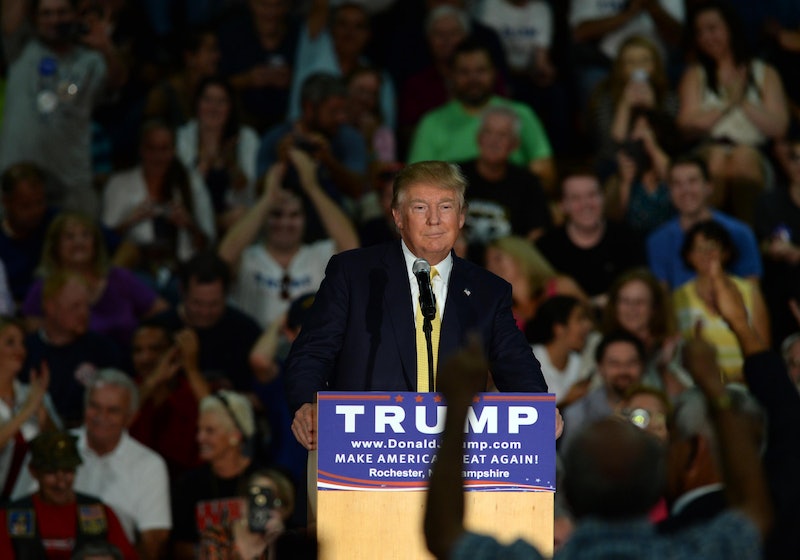 So, you might have heard about this Donald Trump thing — man, that sentence has been said a lot over the last few months. But this is bigger than usual: what happened during his New Hampshire campaign rally on Thursday really speaks to the nativist underbelly of his campaign, as well as among some Republican voters. Basically, Trump failed to correct or denounce a supporter who called President Obama a non-American Muslim, and who described Muslims as "a problem in this country." And really, why would he? Donald Trump was the birther candidate last election cycle, after all, a fact that's gotten glossed over by the latest shames and outrages of his 2016 campaign.

To be clear, when I say "birther candidate," I'm talking about the pseudo-candidacy Trump flirted with in 2011 for months before backing off, a tease that earned him a reputation as a huckster when it came to his presidential ambitions. If it hadn't been for the negative attention he got for backing out, who knows whether he would've taken the plunge this time around?

In any case, by virtue of the nearly ceaseless stream of controversies Trump's been embroiled in since day one — lest anybody forget, his irresponsible, incendiary comment about Mexican immigrants being "criminals" and "rapists" came within the first five minutes of his presidential announcement speech — his history of conspiratorial nonsense directed at Obama has been pretty surprisingly blotted out.

Here's what the questioner said at the New Hampshire rally, in all its racist, blustery ingloriousness.

We got a problem in this country, it's called Muslims. We know our current president is one, you know he's not even an American. But anyway, we have training camps growing, where they want to kill us. That's my question. When can we get rid of 'em?

As some observers have pointed out, it's not entirely clear whether the questioner wanted to "get rid" of American Muslims overall, or was referring to these "training camps" he's so worried about. But this is deeply pointless hair-splitting, a distinction without much difference — whichever he meant, he was spoke from an place of stark, conspiratorial bigotry, and Trump didn't rebuke him one bit, even uttering "right" after he claimed Obama wasn't an American.

None of which should surprise anyone one iota. It's no exaggeration to say that Trump was the highest-profile birther in the world a few years ago, and although he's tried to downplay it this election season, it doesn't sound like his views have changed all that much.

Back in 2011, he railed against Obama for failing to release his long-form birth certificate, in spite of the facts that he'd already provided sufficient documentation, eventually released the genuine article, and had his birth announced in a 1961 Honolulu newspaper. Simply put, there was never a single reason to think Obama was foreign-born — beyond racist fearmongering over his name and skin color, that is, which Trump gleefully dove headfirst into.

He even dispatched (or claimed to, at any rate) investigators to Hawaii to try to dig up dirt on the issue, a public spectacle that resulted in precisely zero payoff. To this day, Trump hasn't given any indication what his alleged investigators found, even though at the time he claimed they "[couldn't] believe" what they were finding. When his Iowa co-chair Tana Goertz was asked about the results of this four-year-old investigation by MSNBC's Lawrence O'Donnell on Thursday night, she claimed Trump would "reveal it when the time is right."

In other words, Trump's never exactly been accountable about this topic, or at the very least he hasn't acted that way. If there was anything notable about his exchange on Thursday night, it's that he didn't offer more magnanimous support. Simply agreeing awkwardly and moving on is actually progress, previous history considered.

All in all, it's pretty depressing, especially because Trump doesn't figure to be badly hurt by this — he's been virtually indestructible to this point in the campaign, and his share of supporters have already stuck with him through brazen controversies that would've derailed any traditional candidate. It's especially upsetting in the context of recent events, too — anti-Muslim paranoia, as we've recently seen, already runs abysmally high in this country.