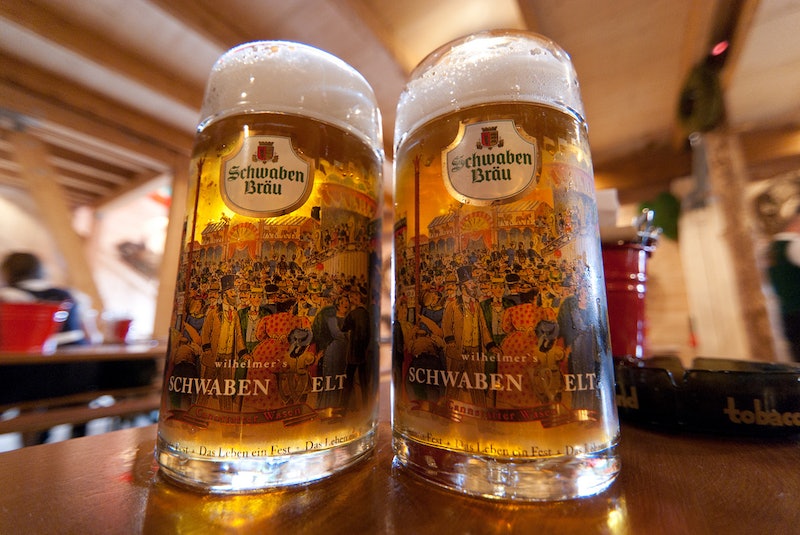 Fall means it's time to break out your new wardrobe: sweaters, boots, scarves, and... lederhosen? Yes, autumn brings many splendid things like apple picking, Halloween, and pumpkin spice everything, but the best of all is Oktoberfest, the German fall festival that celebrates everyone's favorite things: food, beer, and merrymaking. But what is Oktoberfest, you ask? Sure, you've celebrated at beer halls and fairs since you were old enough to hold a stein, but what is the festival really about? And why does it have that name if it actually takes place in September? Allow me to explain why this is one of the best celebrations of them all.

This year marks the 182nd Oktoberfest, which runs Sept. 19 through Oct. 4. Though the official Oktoberfest celebration takes place in Munich, Bavaria, a yearly festival that draws in more than six million people, there are celebrations modeled after it all over the world, including the United States. No matter where it is celebrated, though, there are a few common staples: lively music, mouthwatering food, and big, big pints of beer.

Oktoberfest, which started in 1810, originally took place in October, but as it grew and was prolonged, it was moved earlier in the season, which allowed for better weather and a more enjoyable time for festival-goers. Even though most of the current-day festival takes place in September, the last weekend is usually in October, but the name remains the same no matter what month it's in. At its core, Oktoberfest is really about coming together and having a good time. The 16-day festival features music, games, amusement rides, beer tents, and a traditional Bavarian fair. If you're lucky enough to experience an authentic Oktoberfest celebration, you'll be able to stuff yourself silly with smoked sausages, roasted meats, sauerkraut, cabbage, and pretzels.

If that isn't enough to get you on a plane headed for Germany, then here are six other things you probably didn't know about Oktoberfest and how it's celebrated that will make you want to go out and buy your Dirndl dress ASAP.

1. Oktoberfest began as a wedding celebration.

In 1810, Bavarian Crown Prince Ludwig married Princess Therese von Sachsen-Hildburghausen, and all of the citizens were invited to the celebration. Since then, the festival has grown to include horse races, games, rides, music, and eventually beer.

That's right — the largest beer drinking festival in the world once did not include beer. In the festival's early days, beer was only served outside the fair grounds, but it didn't take long to incorporate kegs into the celebration. Now, more than 7.5 million liters are consumed each year. That's a lot of beer.

3. The drinking doesn't start until the mayor says "O' zapft is!"

Oktoberfest officially starts when the mayor taps the first keg, declaring "O' zapft is!" or "It's tapped!" in English. The first person to get a beer is traditionally the Minister-President of the State of Bavaria, but after that, you're free to "Prost!" (toast) the day away.

4. If the beer isn't from Munich, it's not Oktoberfest.

Even festivals have their rules. Oktoberfest regulations say that the only beer that can be served for the celebration must be from one of Munich's six breweries — Paulaner, Spaten, Hacker-Pschorr, Augustiner, Hofbräu, and Löwenbräu. And, like all other German brews, Oktoberfest beers must pass the "purity" law or Reinheitsgebot, which was passed in 1516 to ensure the beer's quality. Yeah, Germany doesn't mess around when it comes to brewing.

Gingerbread cookies complete with sweet messages made of icing called "Lebkuchen" hearts are festival staples. They even come with ribbons so your "schatz," or sweetheart, can wear it with pride. I mean, you need something other than beer and meat to sustain you, right? Cookies, and someone you love, complete the Oktoberfest diet.

When there's a 16-day long beer festival, someone, or a lot of someones, is bound to have one pint too many. When someone passes out from too many beers, the locals call them “Bierleichen,” or beer corpses. Beware — they're apparently everywhere.

More like this
How Long Does Leftover Stuffing Last? Here's When To Toss It
By Chelsey Grasso and Alexis Morillo
16 Friendsgiving Recipes Your Besties Will Love
By Alexis Morillo
TikTok’s Viral Tunacado Sandwich Is The Internet’s Favorite Lunch Right Now
By Alexis Morillo
Pepsi’s Festive Flavour Is Finally Coming To The UK
By Sophie McEvoy
Get Even More From Bustle — Sign Up For The Newsletter