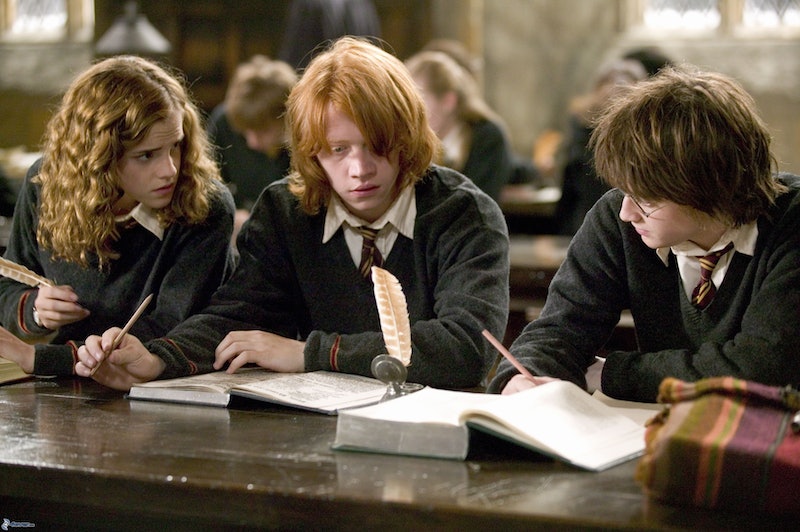 The Harry Potter movies are fantastic and magical, from Sorcerer’s Stone (Hagrid saying “yer a wizard, Harry” is iconic), to the tear-inducing epilogue. The actors delivered legendary performances, and the fact that Daniel Radcliffe, Emma Watson, and Rupert Grint were at the center of the project until the very end was sheer perfection. The experience of seeing the films themselves was even awesome — who can forget dressing up for the premieres, and hearing John Williams’ amazing score start up as the Warner Bros. logo faded in on the big screen? Just listening to Hedwig’s Theme still gives me chills.

Still, when it comes down to it, the movies are best as a complement to the books, rather than a replacement.

Because the plain truth is… the books are better. People who only watch the movies are missing so much of the experience that is this wonderful series. Screenwriters, directors, and editors have to change a lot to take a story from the page to the screen, and plenty gets lost in translation. That’s not to say that the movies aren’t also amazing, and a great representation of the story, but there’s just no substitute for the original seven books that made us all believe that somewhere, an owl carrying a letter addressed to us had somehow lost its way.

The Books Are Funnier

Sure, the movies have their moments of comic relief, but all in all, Rowling's books are way funnier. Fred and George get way more time to shine, and in general there's a lot of British wit that gets lost when the story is translated to screen. From Harry's remarks to Dudley, to banter on the Quidditch pitch, to general Hogwarts student sass, the books are infused with great comedic moments, whereas the movies have to dedicate most of their short time allotment with moving the plot forward, which doesn't leave as much time for humor.

Prime example: Book Ginny was a completely different person than Movie Ginny. In the book, Ginny was sassy, powerful, and independent — in Harry Potter and the Order of the Phoenix she says that "the thing about growing up with Fred and George is that you sort of start thinking anything's possible if you've got enough nerve." In the movies, though, Ginny doesn't get enough screen time to show her fantastic personality, and the screen time she does get only revolves around Harry. Which the movie couldn't even capture perfectly, because their book first kiss was epic and should NOT have been changed!

Characters Are Left Out Of The Movies

Even worse than changing characters, is the fact that some are completely left out. From Peeves the Poltergeist to Winky the House-Elf, many iconic characters didn't even get a mention in the films.

We Don't Get To Hear Harry's Thoughts In The Films

Though the Harry Potter books are told in third person, because of Rowling's use of free indirect discourse, readers get to delve into Harry's mind and understand his thoughts and feelings throughout the series. Unfortunately, this isn't easy to translate to film, so unless Harry voices his opinions we don't get as much info on what he's thinking.

The Books Have A Chiastic Structure

Did you know that the Harry Potter books are symmetrical? The events of the series mirror one another, but this awesome structure doesn't quite translate to the movies, since they have to leave so much out for time.

Speaking of cutting for time... the movies cut SO MUCH INFORMATION. I'm still peeved that the movies didn't show Harry mending his wand with the elder wand, or Wormtail's hand turning on him, or even Rita Skeeter as a beetle. The books have a much richer world because of all this extra information. Not only do these big events raise interesting and important themes, small details such as descriptions of Hogwarts make the book that much richer.

The Books Explain Everything

If someone watched all the Harry Potter movies and had never read the books, they would probably be a little confused in some parts. The fact is, the books offer extremely detailed backstories for everything. Remember the lengthy scenes about Voldemort's upbringing, and him creating each Horcrux? Or what about the scenes with Harry's parents at school, and the original Marauders? Even Petunia's motivation is explained, when we learn about her letter to Dumbledore and his response. In the films, there's not as much backstory, so if you haven't read the books it won't make as much sense.

One of the best things about the Harry Potter series is that it encouraged thousands of people who previously claimed they "hated reading," to pick up a book and actually enjoy it. And allowing so many people to enjoy the written word and collectively experience such an enchanting story is a magic in and of itself.