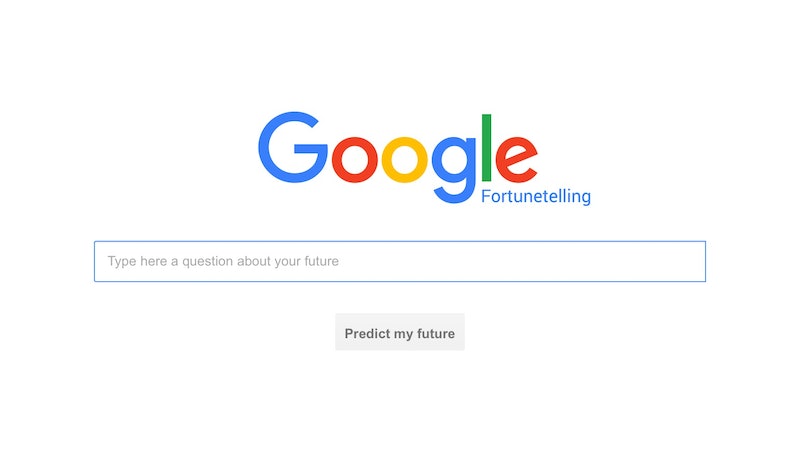 You have to hand it to whoever's responsible for this, because it's pretty cool. Have you ever been curious about what your future holds? Well, it's on the strength of this natural, forward-looking urge that Google Fortunetelling launched on Friday! Aren't you curious what the world's foremost search engine thinks will happen in your life? Well, here's the thing — it's actually a fake site, albeit with a hugely worthwhile and ingenious one. In reality, Google Fortunetelling highlights the plight of refugees worldwide, asking you to consider what it's like to have a really uncertain future.

It's not actually a product of Google, to be very clear. Rather, as The Wall Street Journal points out, its URL (betagoogle.com) is registered in the Netherlands. It still makes use of the clean-cut new Google logo however, which under most circumstances could cause some copyright issues. Although given the excellent cause, lawyering up might not be the best look — and besides, Google itself has been actively fundraising to combat the crisis.

The page invites you to ask a question about your future, in spite of the fact that an Internet search engine actually predicting your future would be more creepy than anything else. But when you start to enter anything into the search field, it autofills immediately, defaulting to the question "where can I find a safe place?" Other suggested questions roll out underneath it, like "will humans ever stop fighting war," and "will I be reunited with my family?"

Then, after a few seconds paused with this list of harrowing questions — questions probably more severe and disconcerting than what most people would think to type in — the big reveal comes.

The page redirects to an explanation of what "Google Fortunetelling" really is: a way to raise awareness about the struggles, horrors, and uncertainties of being a refugee. At present, as the explanation mentions, there are believed to be more than 60 million refugees in the world, a figure that's been elevated by the brutal civil war in Syria.

As Newsweek detailed, the various crises within Syria (parts of the country are also under the control of ISIS) are believed to have displaced a staggering 11 million people, which is essentially half of the country's total population. For some perspective, that would be like 160 million Americans — half of everyone you see each day — being cast out into the world, with no place to call home.

The crisis has been hotly debated in international and domestic circles alike, with pressure building on the United States (as well as European and nearby Middle Eastern nations) to take in these millions of people. So far, the Obama administration has announced that an additional 10,000 Syrian refugees will be brought in. And while that's an absolute boon to those who make it, it still represents a dismally small percentage of those looking — less than one-hundredth of one percent. In total, the U.S. is home to over 75,000 refugees from around the world.

Basically, it's a hellish state of affairs, and it's not one that's going to get any better without proactive, empathetic action on the part of the international community. Simply put, it's incumbent upon all of us in stable, thriving nations to do whatever we can to ease this crisis. And if a little cagey Internet activism can help alert more people to the cause — whether it's the real Google doing the work, or a fake one — it can only help matters.