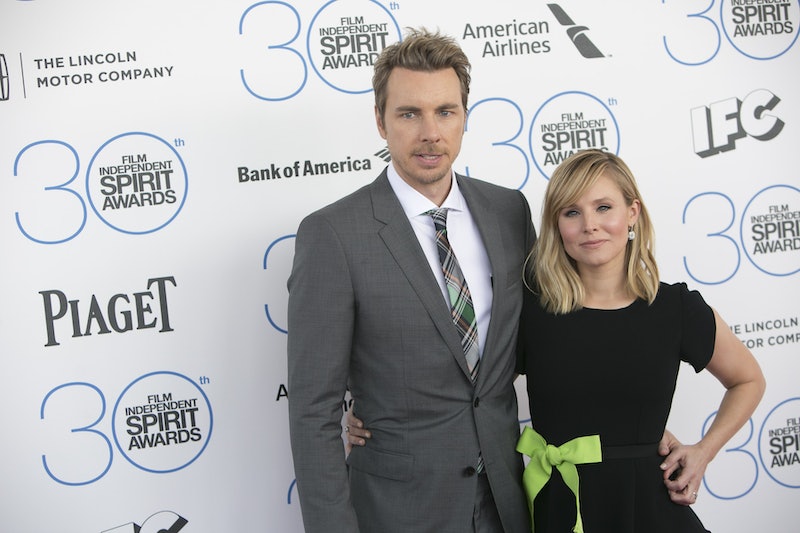 If you're at all into the world of celebrity, you likely have a favorite Hollywood couple, whether or not you want to admit it. Kristen Bell and Dax Shepard have been one of mine since the sloth birthday present days, and they've stayed at the top of the list ever since. There's just something about them together that makes me feel all warm and fuzzy inside and I don't know why. Not only do they seem totally in love, but they also come off as genuinely nice people and talented artists, to boot. If you agree, then you'll be thrilled to hear that Bell has joined Shepard's CHiPs movie, which is basically the best news ever.

Shepard is directing and starring in the big screen adaptation of the popular TV series CHiPs, which is about two highway patrol officers and the adventures they share while out there fighting crime. Michael Pena and Vincent D'Onofrio are also taking part, but Bell's addition is possibly the most exciting news ever because there's nothing I love more than a celebrity couple working together. Bell and Shepard aren't the first, of course — they're joining a long and illustrious list of husband/wife Hollywood duos.

Branglina are one of the best known and most beloved Hollywood couples out there, and Mr. & Mrs. Smith happen to be the movie set on which they met and fell in love. It was a dodgy situation, sure, but you can't stand in the way of true love, and their on screen chemistry in this movie is too hot.

Sure, Tom and Nicole aren't together anymore, but boy were they magic while they lasted. Eyes Wide Shut was a really weird movie, but also a really sexy one and one that I bet they're still glad they made it together while their love was strong.

Rita and Tom actually played brother and sister in this movie, which is extra hilarious. It isn't the only time they've worked together (they've produced several films together), but it is one of the best and I always crack up every time I see it.

Melissa and Ben are another one of my favorite Hollywood couples. They have such great chemistry and really bounce off one another's energy, and I remember cracking up watching them in Bridesmaids — they were my favorite part of the movie! They were also amazing together in Tammy. Basically, I'll watch anything they star in.

I don't even think I realized that Ben and Christine were married when I first watched Zoolander, but I do know they were hilarious and when I did find out that they're together in real life, it totally made sense. They've also worked together in Tropic Thunder and Dodgeball, so clearly it's working on screen as well as off.

Actually, the list of movies Tim and Helena have worked together on over the years is way too long. Basically all of his movies have starred Helena in some form or another. They met when Tim cast Helena in one of his remakes of Planet of the Apes, and since then they went on to do Big Fish, Charlie and the Chocolate Factory, Dark Shadows, Sweeney Todd: The Demon Barber of Fleet Street, and Corpse Bride together. Whew!

All of that being said, I'm still looking forward to seeing Kristen Bell and Dax Shepard together in CHiPs and basically anything else they want to do. I believe in their love that much!