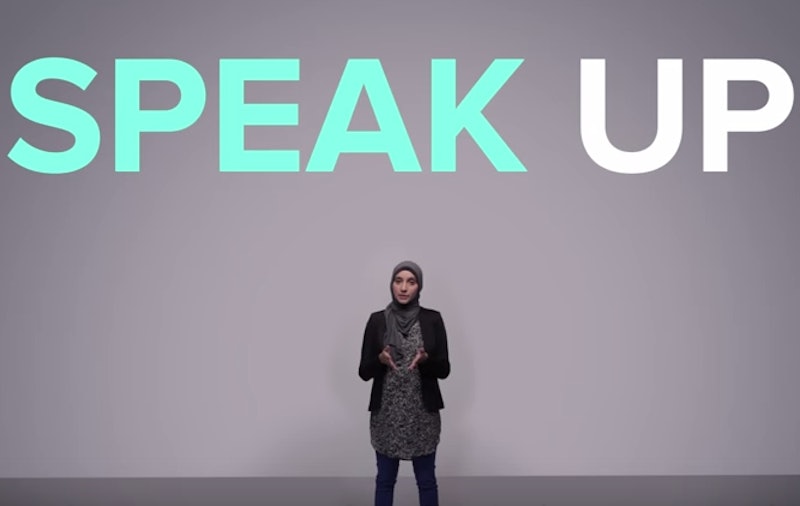 Islamaphobia is real, no matter how much you might want to ignore it or say it doesn’t exist. That point was further driven home this week after Texas ninth grader Ahmed Mohamed was pulled from class and arrested for building a clock and bringing it to school to show his teachers, inciting a wave of outraged sentiment across social media from those who believed that the 14-year-old had been singled out for being Muslim. In the aftermath of the incident, a counter-backlash from high profile figures such as former vice presidential candidate Sarah Palin’s daughter Bristol, who blamed President Obama for reaching out to the Texas teen and inviting him to the White House, erupted as well. On Friday, in response to the outcry, the Huffington Post addressed the controversy and compiled varied reactions in a video about the toxic effects of Islamaphobia.

“I was ecstatic to see Ahmed receive all these offers and attention from the White House and Facebook and so soon, but unfortunately there are hundreds of other Ahmed's and Fatima's out there whose stories go untold,” said Huffington Post’s WorldPost social media editor, Rowaida Abdelaziz. “We thought it was important to shout out about Ahmed and his brilliancy while calling to humanity and letting them know that this is a real problem that is not exclusive to Muslims.”

“Ahmed Mohamed is 14 years old,” said Nouh. “He loves to build things.” Abdelaziz explained that it was Mohamed’s passion for engineering that led him to put disassemble and subsequently reassemble and redesign a clock from his family home, which he then decided to take to school to show to his teachers.

“School officials,” said Nouh, “assumed it was a bomb.” Abdelaziz added that MacArthur High officials then called the police, who arrested him after interrogating him in one of the school’s offices. “Clock, bomb — same thing, right?” joked Nouh.

The two editors then delved a bit deeper, explaining that Islamaphobia in the United States wasn’t exactly a new trend.

“We deal with [a] constant climate of fear and hatred just because we’re Muslim, or we look Muslim,” said Nouh. Abdelaziz added,

This kind of thing happens to us all the time. … Like the time my co-workers had to hide me in the back room, because an angry customer threatened to confront me. Like the one time I had my hijab pulled off when I was standing in a cafeteria line. This is the kind of treatment that isn’t supposed to happen in America.

Nouh also recounted that she had been pestered by those who wondered whether she was truly American, and had once been told by an instructor that she would never be able to find employment if she continued to wear her traditional Muslim hijab.

“[They] told me I wouldn’t get hired anywhere because I wear a hijab,” said Nouh.

That type of underlying discrimination, whether intended to hurt or not, did no one any good, said both women.

“There are millions of brilliant children like Ahmed who get discouraged for good from pursuing their dreams, talents, and passions [because of these kinds of incidents],” Nouh lamented.

Not only were children being put off from their chosen goals, they said, the climate of fearmongering was detrimental to the advancement of the country, especially in an era where slow but eventual progress was in all facets of minority society.

“Hate and bigotry is toxic for everyone, not just Muslims,” they explained, citing a viral hashtag that began trending on Twitter after the story made headlines earlier this week. “[This is] why we should all #StandWithAhmed.”

In the days since 9/11, the day-to-day dealings of most Muslim Americans encountering Islamaphobic behavior have run the gamut from strange and bizarre to downright violent.

Take Muslim chaplain Tahera Ahmad, who was denied an unopened can of Diet Coke because “it could be used as a weapon,” according to the flight attendant who was serving her; or the tragic shooting deaths of three Muslim American students at the University of North Carolina Chapel Hill, allegedly by a man who neighbors claimed disliked Muslims — both incidents which arguably incited an even greater backlash against a religious community already prone to discrimination than ever before.

On Friday, Wall Street Journal op-ed columnist James Taranto insisted that while the country should indeed #StandWithAhmed, the incident had hardly been “Islamaphobic.”

“In reality, many Americans’ sons (and some daughters as well) have been similarly mistreated,” wrote Taranto, citing another incident in New Jersey in early 2001, where 9-year-old Jason Anagnos was called to the principal’s office, suspended, ordered to see a family psychiatrist, and his family forced to pay a $350 fine after the boy constructed a fake “bomb” by taping together condiment packets from a Chinese takeout order and writing “Danger Warning Swanton Bomb” on the front. “There was no media frenzy and no White House invitation,” said Taranto, claiming that this week’s incident in Texas should have been blamed on a faulty, “Zero-Tolerance” system implemented by many schools to prevent larger, more dangerous incidents.

The problem with Taranto’s assertion is glaring: Sure, perhaps the reaction to Anagnos’ invention may have been disproportionate, but Anagnos himself had pulled together the silly “device” with the intent of creating a fake "bomb." Mohamed, on the other hand, stated several times, with the backing of his engineering teacher, that his clock was indeed just that — a clock. He was arrested for it.

Abdelaziz explained that denying the inherent discrimination so clearly evident in the arrest of a young boy, who as far as we know had no prior criminal history or disciplinary issues, was not only ignorant, but created a dangerous social atmosphere — one where hatred is taught early in young people’s lives, and a loyal Donald Trump supporter, for example, would be allowed to comment publicly about the president’s so-called “Muslim” roots and ask the candidate when they’d be able to get rid of the Muslim American community, with little backlash from his peers.

“Everyone has a part to play in making sure a situation like this never happens again,” said Abdelaziz.