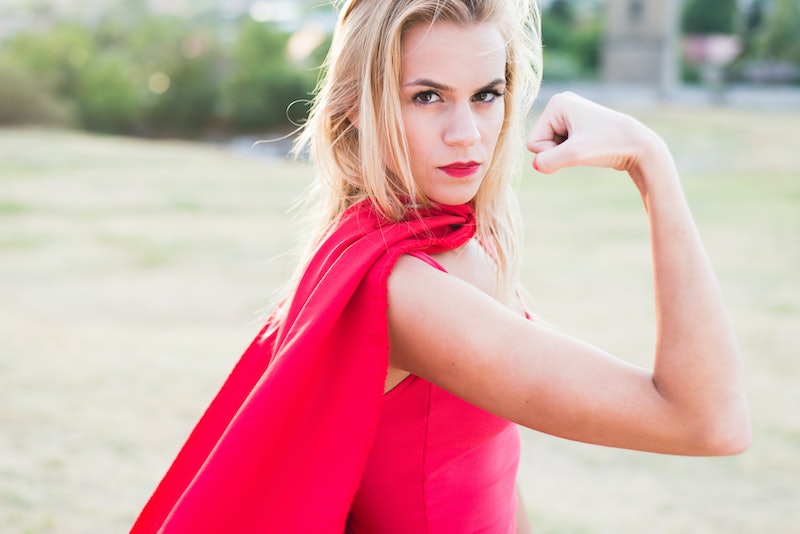 It's a big and scary world out there, and at the end of the day you really have only yourself to depend upon. If you feel downright powerless at times, then, that's normal and totally to be expected. Everyone has their good and bad periods, even if it's easy to forget that when someone or something kicks you when you're down. Even the most accomplished people amongst us had to start somewhere — all the privilege in the world can't literally guarantee personal and professional success for people who've become their own worst enemies.

I've noticed that it's sort of fashionable to proclaim that you don't really feel like an adult, but even if it isn't all our fault, an extended adolescence isn't doing millennials any favors. And just because some people have more power than others in certain ways doesn't mean you're stuck having none forever. That "girl power" slogan is supposed to mean something, and it starts with you. No matter how much of your life you've wasted making excuses and feeling unlucky, you can still turn things around. It's high time to put on your big girl panties, get your chin up, and try these 8 ways to feel more powerful each day.

Put down the paper and stop reading scare stories, because (despite reports to the contrary) the world is actually getting safer and you have less to worry about than ever before. This is not to say that everything's perfect, but the news needs stuff to keep people watching or clicking and it's usually not good news. Just a few decades ago, children were routinely dying of polio in the United States — try to keep in mind that our standards are a moving target, because things mostly get better.

There's no quicker shortcut to feeling more powerful than straightforwardly becoming more powerful physically. Even if you have to start with two pound weights, the increasing numbers will give you a tangible sense of progress, regardless of what else is going on in your life. Try the classic book Starting Strength or invest in a couple of sessions with a trainer to jumpstart your new habit.

It's very easy to let the glow of a past success fade rapidly as you set your sight on new challenges, but don't neglect to give yourself credit where it's due. Next time you feel really uncertain that you can meet a goal, remember that in some ways you've done it before, and that the new task before you is probably smaller than it feels in an overwhelming moment.

No one feels their most powerful when they get blindsided by something. Though sometimes it's unavoidable, you can set your self up for success by planning ahead. Need to have a difficult conversation with your partner? Rehearse it out loud a few times the night before. Worried about a project at work? Buckle down and close those social media tabs when you're trying to get it done the week before. The Boy Scouts had it right — being prepared will serve you well.

Focus on what you can control

There's lots of stuff you can't control, and it makes little sense to focus on those things. Life outcomes are much better for people with an "internal locus of control," or a tendency to believe that they are responsible for most of the things that happen to them. This doesn't mean blaming yourself when you're genuinely a victim of circumstances. But it does mean that you'll benefit from generally approaching the world with the attitude that what you do matters to how things turn out for you. It's a self-fulfilling power prophecy.

Surround yourself with winners

Birds of a feather flock together, so be careful of the company you keep. Surrounding yourself with "winners" doesn't have to mean hanging out with only the rich, pretty, and conventionally successful people. But if you're keeping around an old acquaintance just because, but she's a real Debbie Drama Downer every time you talk, maybe it's time to just politely stop subjecting yourself to that.

No one wins every round with life, but you can make your failures constructive ones. What part of the failure was avoidable? What part really wasn't? What can you learn from it? The sadness of a single failure stings, but you can prevent a string of similar, incredibly demoralizing ones by conducting a thoughtful post-mortem.