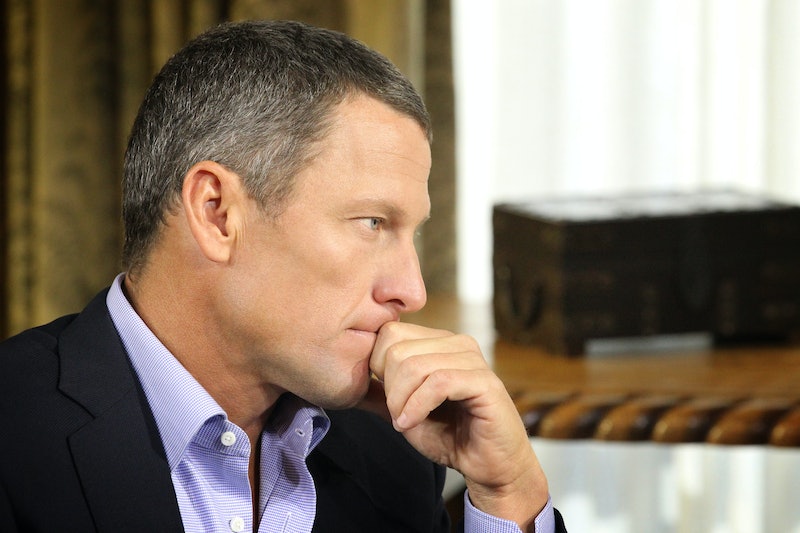 Ah, Lance Armstrong. Though he still hasn't goten around to making the apologies he promised Oprah, the Dodgeball extra (his only official title these days) has found the time to speak to La Monde, the French paper that originally reported on his doping back in 1999.

Armstrong stepped forward to announce, gravely, that the decision to ban him from cycling has ruined his life (injustice!), that the Tour de France is impossible to win without doping (of course!) and that he still considers himself a winner (why not!). Technically speaking, however, he's been stripped of each and every one of his Tour de France titles.

"The Tour de France is an endurance test, where oxygen is decisive," Armstrong said, adding it's "impossible" to win without some oxygen-based (aka doping) help. "Our system was very simple, very conservative, and not evil," he insisted.

"History will show that all of this is a simple posture USADA [the U.S. Anti-Doping Agency] used to create buzz," Armstrong said. The decision to conclusively ban him from competing, he added, has "perfectly managed to destroy a man's life, but not at all benefit cycling."

The International Cycling Union fired back immediately. "[Armstrong's] comments do absolutely nothing to help cycling," President Pat McQuaid said. "The culture within cycling has changed since the Armstrong era, and it is now possible to race and win clean."

We hereby dedicate this one to Armstrong.

More like this
Jude Bellingham’s Superstar Football Talent Runs In The Family
By Maxine Harrison
The David Beckham Qatar Controversy, Explained
By Sophie McEvoy
Read Dan Levy's Heartbreaking Message After The Club Q Shooting
By Stephanie Topacio Long
Romeo Beckham Shared A Sweet Farewell Note From “Proud” Sister Harper
By Sam Ramsden
Get Even More From Bustle — Sign Up For The Newsletter