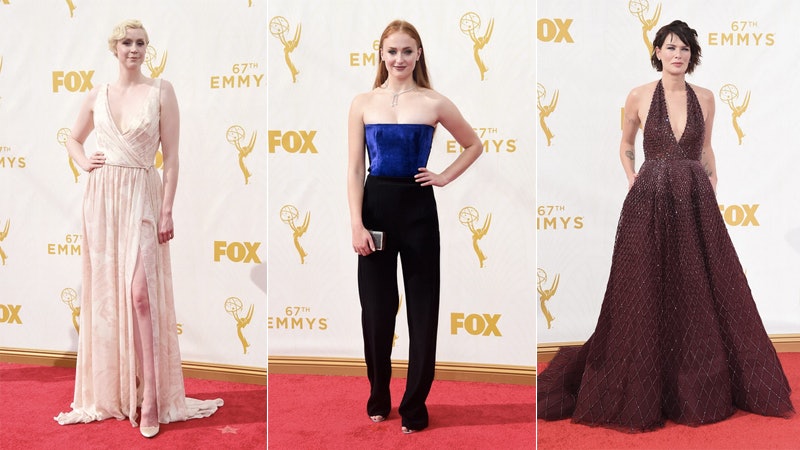 For all the fellow Game Of Thrones enthusiasts of the world who have been missing their fix of Emilia Clarke and Kit Harington these past few months, seeing the cast of Game Of Thrones at the 2015 Emmys will offer just enough of a fix as we all await news of Season 6. Nominated at the Sept. 19 awards for Outstanding Drama Series, Supporting Actor (Peter Dinklage), Supporting Actress (Lena Headey and Emilia Clarke), and Writing (David Benihoff and D.B. Weiss for "Mother's Mercy") it's set to be a grand old night for the IRL embodiments of George R.R. Martin's insane and beloved fantasy series. But this is Westeros, isn't it (or at least it is in my mind)? So we all knew the fashion on the red carpet was going to be on point.

Lamentably, the cast of GoT did not step out on the carpet wearing gold-encrusted gowns, suits of armor, horses as accessories, or crown braids, but they did take notions of "black tie event" to a whole new level. While the gents of Game Of Thrones pretty much stuck to tuxes and ties (as the majority of dudes seem to do on the red carpet), it was the women whose gowns were almost painfully beautiful that had all eyes transfixed.

The only thing that really comes to mind when I see this look is "wow." Christie's high-slit, low-cut, lightly patterned gown is daring and statement-making, yet princess-like enough that it would fit in perfectly in Westeros.

Although most of us probably can't imagine a world in which Samwell Tarly, Theon Greyjoy/Reek, and Lord Varys are friends, the trio of actors certainly do look good together. From Allen's bowtie to Bradley West's gelled hair to Hill's pouty expression, the gentleman are dapper-tastic.

How obsessed are you with Sophie Turner's trouser and top set? Breaking all the red carpet rules, she left gender roles at the door and proved that there is no better statement-maker than something that dares to be different, empowering, and unique all in one.

Maisie Williams will, realistically, forever be Arya Stark in my mind. While I'm sure Arya would run for the hills if she caught sight of Williams' furry heels and Joan Holloway meets Barbie dress, fashion types the world over are sure to be dubbing Williams the sartorial universe's new hero.

Actress Lena Headey almost seems to be channeling on-screen counterpart Cersei Lannister in an oxblood gown with just the right amount of sparkle.

Of course, Lena Headey's on-screen brother/lover looked equally glam tonight in his tux and bowtie combo. Men-on-the-carpet looks are never quite as intriguing, but he gets an A for dapper effort.

It's almost weird to see Carice van Houten outside her witchy Melisandre garments, but in this baby pink gown and classic pinup beauty look, she looks like just the type of fairy queen to bring Jon Snow back from the dead.