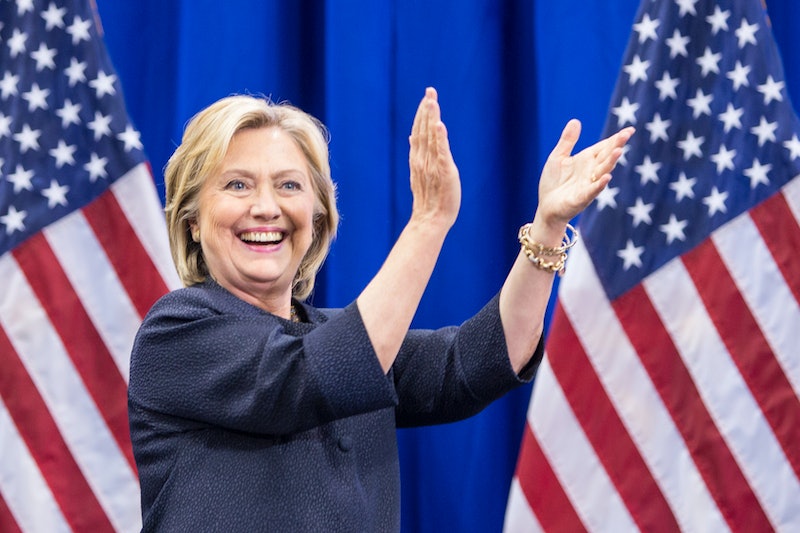 Thanks to moderator John Dickerson on Face the Nation, we now know Hillary Clinton is a real person. No, this is not an Onion article, though I wish it were. After months of speculation as to whether emotions existed behind Clinton's steely exterior and polished rhetoric, the Democratic presidential hopeful finally addressed the issue herself. On Face the Nation Sunday morning, Dickerson reminded the former secretary of state that she had once told a friend she was no longer interested in "phony makeovers," and asked her, in turn, if she could describe the real Hillary Clinton in three words. Tossing her head back, Clinton laughed. See? Happy emotion.

"Look, I am a real person, with all the pluses and minuses that go along with being that," she then proceeded to say. "And I have been in the public eye for so long that I think — you know, it's like the feature that you see in some magazines sometimes. Real people actually go shopping, you know?" But here, Clinton is making light of one of her heaviest criticisms — authenticity. She's isn't just a celebrity pictured in Us Weekly buying pistachios in Whole Foods. The question of her realness comes down to a very serious, albeit overblown, PR problem.

According to an August Quinnipiac poll conducted in the three biggest swing stages — Florida, Ohio and Pennsylvania — only about a third of respondents answered yes to the question of whether Hillary Clinton is "honest and trustworthy." To put things into perspective, Jeb Bush elicited positive answers at 54 percent to the same question in Ohio and Pennsylvania, and even Donald Trump scored higher in one state — 37 percent in Ohio. In an early September ABC News/Washington Post poll, 53 percent of Americans said they viewed her unfavorably — in July that figure was 45 percent.

When her aides told The New York Times that she will now approach her campaigning with more "humor and heart," it somehow made things worse, booming over her voice on policy and even inciting mockery from former Obama adviser David Axelrod. Obviously, the email server situation doesn't help, but Clinton's image of reservation and coldness has been around for a while. Who can blame her? She has spent decades in the media spotlight, a significant portion of which was undoubtedly with reluctance. Naturally, she developed a certain standoffishness.

As Vox points out, the notion of being inauthentic is synonymous with having an eye for strategy, which is "considered a compliment when applied to a male candidate for the presidency." The issue of gender aside, what even is the value of authenticity? According to The Washington Post's Paul Waldman, authenticity is baloney. "The truth is that all campaigning is a performance, by its very nature," he wrote in an opinion piece. "That's true of a politician, it's true of a teacher in front of a class, and it's true of you or me when we tell a joke at a party."

Whether it's her slight discomfort in demeanor or her perceived baggage in Capitol Hill, there seems to be consensus for Clinton's prescription of realness. Perhaps she isn't as charming as Joe Biden or as electrifying as Bernie Sanders, but she just might make up for it in wisdom, pragmatism, and tact. She confirmed it herself, ladies and gents: Hillary Clinton is a real person. Now let's table this discussion and actually pay attention to her platform.