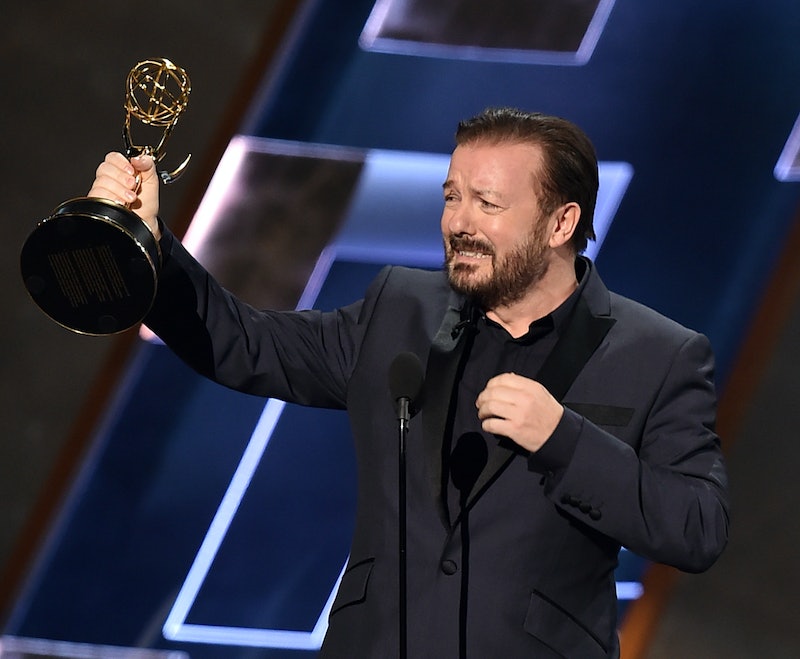 It's no secret that bona fide comedy legend Ricky Gervais always knows how to bring the funny — with a tad of awkward comfortableness. After all, this is the British comedian who gave us the original The Office on the BBC! And, that awkward comfortableness was definitely present while Gervais was presenting the Emmy for Outstanding Supporting Actor In A Comedy Series on Sunday night. During his speech, Gervais claimed to not have won an award of his own. But, is that true? Does Ricky Gervais have any Emmy Awards?

This year, Gervais is nominated for Outstanding Lead Actor in a Limited Series or Movie for his work on the series Derek, which is currently available on Netflix and ended its run in December. That trophy is the one he referred to on stage on Sunday night: "I haven't lost yet," he remarked, before asking to be handed an Emmy (and getting one). He proceeded to pose with it and (pretend) weep for the cameras. Gervais asked the audience, "Take a picture of that. Tweet that, and bob's your uncle." And, of course, the Internet listened — viewers tweeted and made GIFs (duh).

Gervais has given us so much incredible comedy over the years and is such a beloved comedian, so I knew he had to have won at least one Emmy. And 22 nominations isn't joking around — with that many, the man has to be doing something right!

Plus, who hasn't dreamed of going up on that stage and orchestrating their own little Emmy win? I mean, I may have at one point — and I'm super jealous that Gervais has gotten to do it for real and pretend.