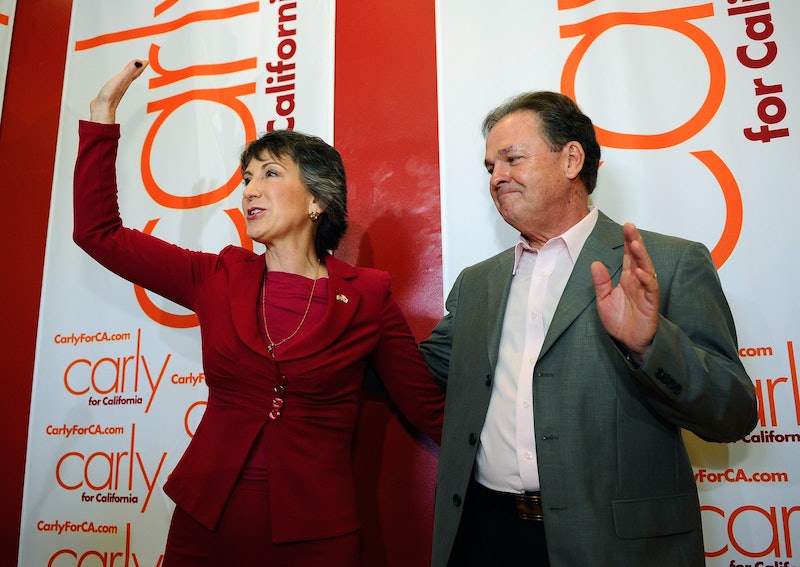 Nearly all eyes have been on GOP candidate Carly Fiorina and her husband Frank Fiorina after her emotional performance at Wednesday's GOP debate. The presidential candidate discussed the issue of drug addiction with a touching anecdote on how she and her husband had "buried a child to drug addiction." That child was Lori Ann Fiorina, Carly Fiorina's stepdaughter and Frank Fiorina's daughter by his first wife, Patricia Easler Fiorina. It's certainly a less-known fact that Carly and Frank were both married to different people prior to their wedding in 1985. But with Carly rising to second place in the polls among GOP voters after Wednesday's debate, she and her family are nearly the center of national attention and it's more than likely that new details about their past will soon emerge.

It's unknown when Frank married his first wife Patricia, but they filed for divorce in 1981. The divorce case lasted for two years, Heavy reports. However, prior to their divorce, Frank and Patricia had two daughters: Lori Ann, born in 1974, and Tracy, who is currently 44 years old. Carly discussed Lori Ann's death in 2009 from drug overdose prior to Wednesday night's debate in her book Rising to the Challenge, which was released earlier this year. Carly's portrayal of Lori Ann as her daughter in the book prompted a response from Patricia, Frank's first wife and Lori Ann's biological mother.

According to the Daily Mail, Patricia took issue with Carly allegedly writing her out of her own daughters' lives in the memoirs, especially when discussing Lori Ann's tragic death. "There are two sides to every story. That's not how I remember it. Lori was my daughter and I grieve her everyday," Patricia told The Daily Mail. According to the news site, Patricia was granted custody of Lori Ann and Tracy following her split with Frank. In her memoirs, Carly wrote that she met Lori Ann in 1981 when she was 6 years old. She and her stepdaughters undoubtedly became close, but in her book, on her campaign website, and in multiple interviews and speeches, Carly fails to identify Frank's daughters from his first marriage as her stepdaughters.

But beyond Patricia's divorce with Frank, and her brief conflict with Carly over her memoirs, we know very little about Patricia or her life with Frank prior to his divorce and second marriage. Carly and Frank began working together at AT&T in 1980, which was around when Carly's first husband of seven years, Todd Bartlem, alleged to Vanity Fair that Carly began an extramarital affair. It's certainly worth noting that 1981, the year Carly wrote that she met Frank's children, was also the year that he filed for divorce from Patricia. Carly's own divorce concluded shortly after Frank's, in 1984, and was filed in 1983, eight months before Frank's was finalized. According to the Daily Mail, in May 1984, six months before her divorce was finalized, documents show that Carly was already living with Frank.

Little is known about Frank's first marriage or Patricia. Given Carly and Frank's virtual silence on his first marriage, we can only guess the past is something they aren't ready to open up about, and try to respect this.