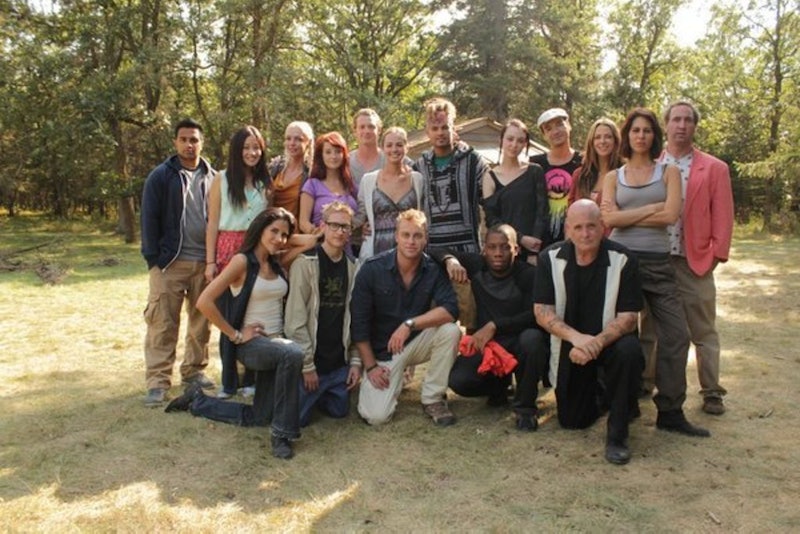 In 2000, CBS's Survivor started a reality television craze, which quickly turned into a new television model. I still remember sitting around the TV with my family and watching as Richard "The Rat" Hatch took home the ultimate prize: a cool $1 million dollars. At the time, nothing could be more exciting that watching the cumulation of a season full of alliances, rough conditions, betrayals, and, yes, bug-eating. Why were we so engaged with Survivor? Because it was brand new, fresh, exciting — and, unlike Who Wants to Marry a Multi-Millionaire?, it felt very real.

Survivor isn't a novelty on television anymore. After seasons upon seasons of the show, the concept — the one that once felt so fresh and original — started to get stale. How many times would we watch a tense tribal council meeting, or bicker about dividing up rice? How many people would we have to watch lie about their sick grandma for sympathy votes? Though Survivor survives, it doesn't thrive in the same way it used to.

Enter NBC's latest scripted television show, Siberia. It's a scripted show that is formatted to appear like a reality show — specifically, a reality show like Survivor, in which a group of strangers must attempt to live in the wilderness.

If you didn't know better, you'd think Siberia actually was a reality TV show — there's nothing in the first half of the pilot to suggest otherwise. It begins with an Australian host lining up 16 contestants and introducing them to the "game": survive the winter in the harsh Siberian wilderness, and those who are remaining get $500,000 to split amongst themselves. In this reality show, there is only one rule: Walk through the exit, and you're out of the game.

The episode goes along like the first episode of a new season of Survivor. It's a race-like competition for beds, there's tension between the "high-maintenance-bitch" and the "leader," there's a competitor refusing to hunt for food with the group because he's "self-sufficient" and "isn't here to make friends"... etc. It's only when the group hears sounds coming from the woods — and sees that their cameraman has been wounded — do they learn that one of their competitors is (gasp!) dead. "There's been an accident, and it's fatal." says their host. He gives them the option of leaving with $5,000 or going home. We won't find out their (obvious) choice until next episode.

Ignoring the poor pacing of Siberia (the most exciting part of the episode — essentially what makes it a drama and not a secretly scripted "reality" show like The Hills — happens five minutes from the end of the episode), Siberia is a flawed show on principle alone.

TV audiences like scripted dramas because watching these shows is like watching a heightened version of reality. No matter how gritty or realistic a show seems, what happens in a scripted drama is much, much different than real life. We react differently to what happens on a drama. Something truly intense has to happen in order for us to take notice and talk about it. In a reality show — or at least, a show marketed as reality — barely anything has to happen in order for us to get excited. (This may be the reason why my friends and I binge-watched The Hills over the course of three days).

Think about what happens on a run-of-the-mill episode of The Apprentice. People get into conflicts over, what, the size of the font on a poster? But we're just as engaged as we would be by watching a huge blowout between cops on Law & Order. We project ourselves on reality television characters. They behave outrageously, but in a true-to-life way — kind of like how you can't help being entertained by your crazy friends' latest antics. But if your friends started behaving in a way that was less Real Housewives and more Breaking Bad, you'd be horrified.

Had Siberia actually been a reality show, it could have been mildly entertaining. (After all, Survivor is still kicking.) But we already know that this show is fake, and that it's using the reality format without the show being unscripted. The characters have to mimic real-life reactions in order to keep up the "this-is-a-reality-show" schtick, while living in a world where crazy drama happens. It means that only so much drama can happen in order for the reality show format to still work. It's not like one of the contestants can flat-out murder another one — a real reality show would cancel production immediately. If something outrageous happened on the show — something that is easy to get away with in ordinary scripted drama — it would essentially destroy the reality premise. It would be too difficult for the audience to suspend their disbelief.

Siberia can't be both a drama and a reality show. This isn't "found footage"-style — it's not The Blair Witch Project: The TV Series — but an actual reality show setup. It could have worked as a drama set in a reality show — perhaps one in which we get to see both the "reality show" reality, and actual life outside of the cameras — but Siberia's current format begs too many questions to be a success. It's not going to give us the real-life grittiness of surviving in the wilderness that Survivor did, or the nail-biting drama of a Game of Thrones.

On paper, this hybrid could have been an intriguing idea — but, in execution, we just want to vote it off the island.